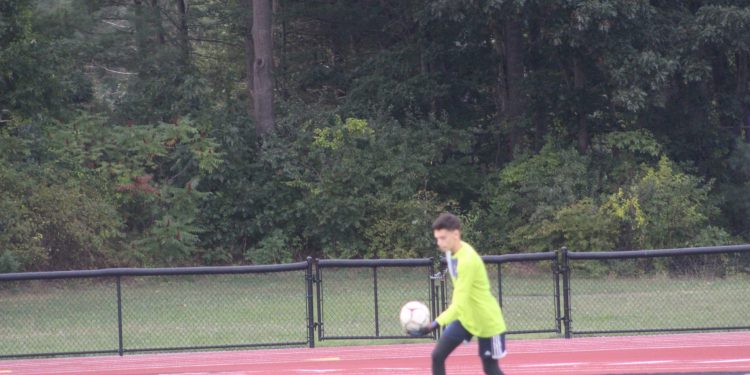 TORRINGTON: Man, that was a terrific soccer game.

Playing for just the second time in 2021, the Torrington boys soccer team and the St Paul Falcons (who were playing in their third match) played one heck of a soccer game.

Post season kind of soccer with physical, tough play from both teams.

A Brayden Nietch goal with 22:34 to go in the first half, combined with a masterful job in the nets by Jack Delmonico gave the home team their second win of the year in a 1-0 final.

In their first match, Torrington had beaten Kennedy by a 6-0 final in game that wasn’t a test.

Thursday night was and the home team got high marks across the board.

St Paul, a hard luck 0-3 (they started the season against Naugatuck and Holy Cross) is a big and talented team that will be a factor in the Naugatuck Valley League all year.

It was a tale of two halves, as often in the case with two evenly matched teams.

Torrington had the better of the action over the first 40 minutes by keeping the pressure and possessions in the Falcons end by controlling the middle of the field, not allowing the visitors break away opportunities.

Coach Mike Fritch Jr got stellar play all over the field from a team that seems to be getting on the same page early.

With senior Michael Valentine acting as the calming force on defense while setting his teammates up on offense on free kick opportunities, the home team had the chance to attack.

Nietch drilled home the games only score nearly midway through the half and as he has been his entire career, is a scoring threat anytime he gets the ball near the opponent’s net.

Ethan Stater was a force on Thursday night on the offensive and on defensive.

The Raiders were getting to most balls before the Falcons over the first 40 and were in control.

In the second half, the Falcons changed the channel and became the aggressors.

Not that the home team backed down, the visitors just turned it up a notch.

To their credit and largely thanks to Delmonico, St Paul was not able to find the back of the net despite multiple opportunities, including a late breakaway that Delmonico foiled with a terrific stop.

He impressed his head coach along the way.

“Jack came up big tonight,” Fritch said. “He wasn’t challenged that much in the first game, but he stood tall, especially on that breakaway.”

It’s not often that this early in the season you get this kind of quality soccer game.