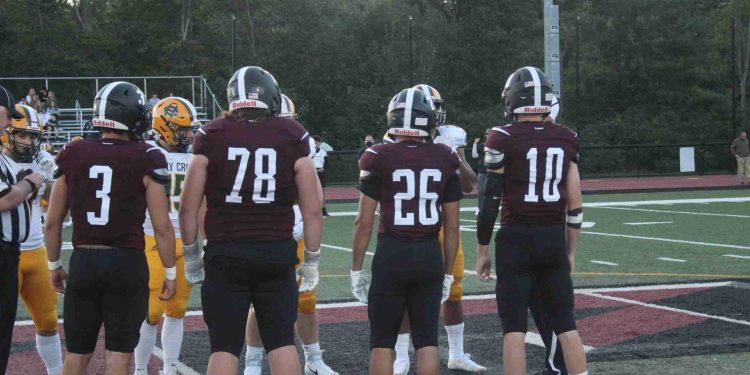 TORRINGTON: Every once in a while, a coach is fortunate enough to not only have a talented group of young men but also high character individuals as well.

Teams they truly love leading because the student/athletes are committed and have bought into what their mentors are throwing out there.

That is certainly the case with the Torrington Raiders football team who are coming off their second road win of the year, a thrilling 36-33 win at Woodland on Friday night.

The Raiders are true road warriors so far in the fall of 2021, beating rivals Naugatuck and the Hawks while dropping home decisions to Holy Cross and Seymour at the Robert H Frost Complex.

That was a tough opening four games for Torrington against some of the top teams in the Naugatuck Valley League and if you had asked head coach Gaitan Rodriguez if he is pleased with his team, at 2-2 after that block of games, he would certainly say yes.

“These kids have given me everything so far this year,” Rodriguez said. “They never get too down or too high. They played a heck of a game Friday night.”

It was a game that featured a four-touchdown night for quarterback Tyler Semonich and yes you read that right. Passing touchdowns.

While the Raiders are a run first team with the single wing offense, they are by no means afraid to go to the air as they showed so well on Friday night.

Not that it was the plan going in to become a pass only team for a night, things just worked out that way.

” We go into each game looking for Tactical Balance,” Rodriguez said. “We will run most times but when we see things, we think we can take advantage of, we have full confidence in this group to make the plays we send in.”

Semonich ran for a score and had touchdown throws to Sean Clinkscales, Matt Adams, Tyler Zepperi and Exodus Rosado while Clinkscales passed for a key two-point conversion as well.

Adams a sophomore tight end, made a tremendous one-handed catch for his score while Rosado took a screen pass and found paydirt from 65-yards out.

The Semonich to Zepperi connection went for the game winner but as it was in the Naugatuck win, contributions came from all over, on both sides of the ball.

After Torrington had taken the 36-33 lead with just over three minutes left, the Hawks forced a three and out that left the visitors with the ball deep in their own territory, needing to punt.

Earlier this spring, I was at a Raiders practice when I noticed a punter that was really getting some distance on his kicks.

Turns out it was Clinkscales (who is now also kicking extra points) and on Friday night he earned his keep with a booming kick from his own 30 that left the Hawks with a whole lot of field and not a lot of time to try and either tie things or come away with the win.

Inspired by the long kick, the Raiders defense stiffened, forcing the home team to turn the ball over on down with just over a minute left.

“The defense grew up tonight,” Rodriguez said. “It might not look like it on the scoreboard, but we saw a great many improvements that they can build on.”

Torrington is home this Friday to take on Derby, the other Raiders in the NVL at 7 p.m. at the Robert H Frost Complex.

Come on out and see a team that is making some noise in the NVL and is made up of some great character student/athletes.