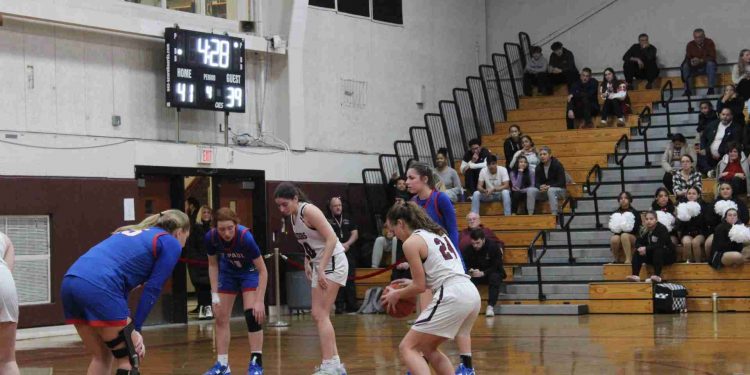 TORRINGTON: After dropping their last two games coming into Friday night’s matchup against Saint Paul, the Torrington girls’ basketball team was in need of a win.

Two tough road losses, the first to Holy Cross by a 57-45 final and the next a disappointing 34 -27 loss at Woodland made their performance Friday night an important one.

The Falcons came in with a 5-3 mark and usually play the Raiders tough but at the end of three quarters, the home team had a 10-point lead at 37 – 27 seemingly in the drivers seat.

Three consecutive turnovers by the home team to start the fourth quarter led to a 7-0 run by the visitors and all of a sudden, we had a ball game.

A tie though, would be the best the Falcons could do on this night as key plays from seniors Leah Pergola, Brianna Murelli, Rachel Brewer Karimi and junior Haley Burger helped Raiders hang on for a 51-47 win.

Burger led her team with 13-points while Pergola finished with 12 and Murelli 10.

While they may have wished for an easier night that with a few more made layups may have been a yawner, the Raiders showed grit in a fourth quarter that seemed to be slipping away from them after the slow start to the frame.

The visitors were never able to go ahead after catching the Raiders, thanks to key play after key play.

It started with Burger who made a jumper for a 41-39 lead.

After St Paul knotted things with a bucket by Rebecca Kelly (game high 20), Pergola made a nifty move to the basket and converted for a 43-41 lead.

With 2:14 left and the lead just one, Pergola struck again, this time with a rhythm three pointer from the right side for a 46-42 margin.

Audrey Tice (10 points) would keep her team within striking distance with a bucket as the Raiders then looked to run some time off the clock.

With 39.6 seconds left in the frame, the Raiders took a time out to set up a play as they inbounded from half court.

The play worked as Brewer-Karimi broke free and was all alone for the layup that made it a four-point game at 48-44. Murelli made one of two free throws, as did Burger to counter a three-pointer by Tice.

A gut check for sure but a good one as the Raiders improve to 6-2 on the season with three games on tap next week.

They host Ansonia (2-7) on Monday before heading up Route 8 to take on Emily Arel and the Gilbert Yellowjackets (6-3) before wrapping the week at Derby (0-9).