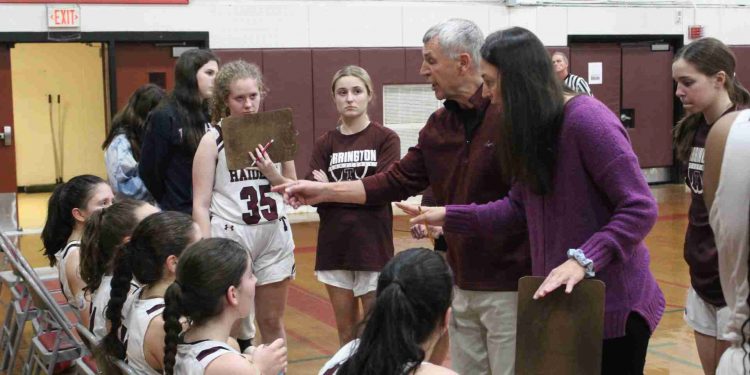 A 9-3 final quarter led the Raiders to an important 35-33 win over visiting Wolcott on Tuesday night in the Connie Donahue gymnasium.

Seniors Leah Pergola, Amelia Boulli and Rachel Brewer-Karimi sparked a 9-0 run to turn things in the home teams favor and the squad had just enough left to close out the Eagles, securing an important Iron Division win.

Torrington improves to 10-2 on the year while Wolcott falls to 11-4.

Pergola led the Raiders with 14 points while Boulli added 11 in a game that may have been short on style points but was high on defensive intensity.

The visitors used a full court press from the start and while the Raiders handled it well for the most part, like most pressure defenses, it wears on a team, and it did Tuesday night.

That senior clutch play started with Pergola who went coast to coast off the press break for a nifty lay up that closed the gap to 30-28.

Brewer-Karimi, who seems to know how to be in a good position to make something happen at key points in games, drove to the basket near the end of the third, was fouled and made one of two free throws. 30-29, Wolcott.

Pergolas, Boulli and Brewer-Karimi opened the fourth with buckets to give the Raiders the lead at 35-30 with nearly six minutes left in the fourth.

Two free throws by the visitors made it a one-possession game at 35-32, an eternity late in a contest but the Raiders defense, coupled with their ability to slow down (just a bit) and run a little time proved to be the difference.

To say these teams knew each other well would be an understatement, as Pergola explained.

“We have all played against each other since I think sixth grade,” the senior standout said. “It’s always back and forth with them”

The Raider defense held Wolcott to just three points in the final frame, no baskets, only three free throws.

One might think that if you don’t score yourself in the final five plus minutes of a game, things might not turn out well but on this night, it proved to be just enough for Torrington.

The Raiders are home Friday to take on Seymour (8-5)