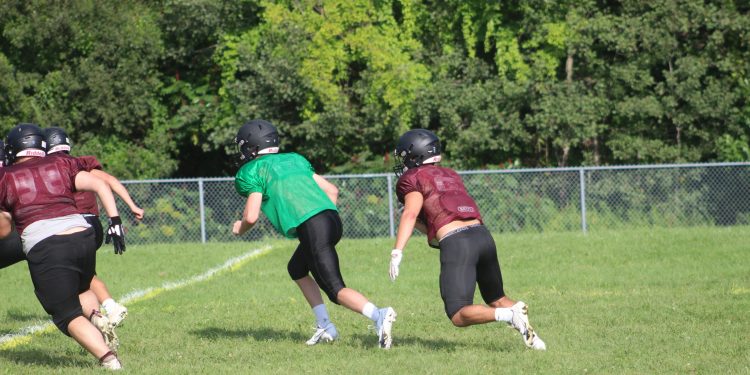 Raiders and Yellowjackets Raring to Play Football Once Again

To say the Torrington and Gilbert/Northwestern football teams are chomping at the bit to return to action would be a decided understatement.

Both programs, as all of the state’s high school football teams, were sidelined last fall because of restrictions in the wake of the COVID-19 pandemic. But the two clubs are raring to go for the 2021 season.

“We are very happy to have the opportunity to play football this year,” said Torrington head coach Gaitan Rodriquez, in his ninth year at the helm of the Raiders, who were 6-4 in 2019. “Every day is a blessing and we make the best of it.  Practices overall have been going well. We had to endure a bump in the road and needed to quarantine this season, which disrupted things for a bit. But we have been back practicing.”

Rodriquez said his team responded to losing last season and a pre-season quarantine, “very well” and “made the most with what we were allowed to do” during the quarantine period. “Since returning, our athletes have done an excellent job with their effort and concentration during practice. We are grateful for the opportunity and very excited. The boys are very excited to get the season started.”

With so many seniors playing prominent roles on the team, Torrington should be able to hit the ground running. The Raiders have some considerable size on the offensive and defensive lines; Rivera and McGowen both are 260 pounds, Iszczak 280 pounds and Coleman 220 pounds.

Semonich is six-feet, 165 pounds, Clinkscale and Morales both have some muscle at 180 pounds apiece, and Francis and Zepperi are lanky receivers that should present superb targets for Semonich to throw to. The Raiders will run a single wing offense.

“We have a challenging schedule,” said Rodriquez. “We open the year with Holy Cross (September 10), Naugatuck, Seymour, and Woodland, all teams that had winning records in 2019. We also play Ansonia, Wolcott and Watertown in the second half of the season. I think the opener is always a key to set your season in the right direction. We are embracing the challenges ahead and are very excited to get the opportunity to play football again.”

Gilbert/Northwestern head coach Scott Salius echoed Rodriquez’s excitement about having his team back in action this fall after sitting out 2020.

“I think the players are excited to be back,” said the coach, in his 14th year as head man of the Yellowjackets, who were 3-7 in 2019. “The upperclassmen just to be playing again and the freshmen class excited to start their high school experience.”

Salius talked about his team’s preparations prior to a new season.

“Like most every other team our pre-season has been spent evaluating players. We have to spread reps out at practice so we can see what each player has for ability and where they all fit together.  In the past, we had more of an idea coming into the year as to what players could do and what positions would best work out for them. The weather hampered us in the second week of practice with rain and excessive heat altering our practice plans.”

Thompson had 59 tackles, third on the team, with 13 receptions for 135 yards in 2019, and Camp had four touchdowns in 2019, one rushing, two receiving and one on a kickoff return.

Gilbert plans to run a Base I formation on offense with spread packages, Salius said.

“I’m not sure at this point what the toughest team in the Pequot League will be. There are just too many new faces to make any predictions. We are excited to add Derby as an out-of-conference game the week before Thanksgiving. With the loss of Sacred Heart, Waterbury Career Academy, which we had played on Thanksgiving the last four years, picked up Wilby on its schedule. So that forced us to move our Granby/Canton Game to Thanksgiving, which makes sense as our co-op is on the border with their towns.”

Gilbert opens up September 11 at home against Stafford/East Windsor/Somers. The ‘Jackets also play Coventry/Windham Tech/Bolton/Lyman, North Branford, Windsor Locks/Suffield/East Granby, Old Saybrook, Ellington, and Sports and Medical Sciences Academy in addition to Derby and Granby/Canton. Along with Stafford/ East Windsor/Somers, Gilbert has Windsor Locks/Suffield/East Granby and Ellington at home prior to the big Thanksgiving Day clash against Granby/Canton.