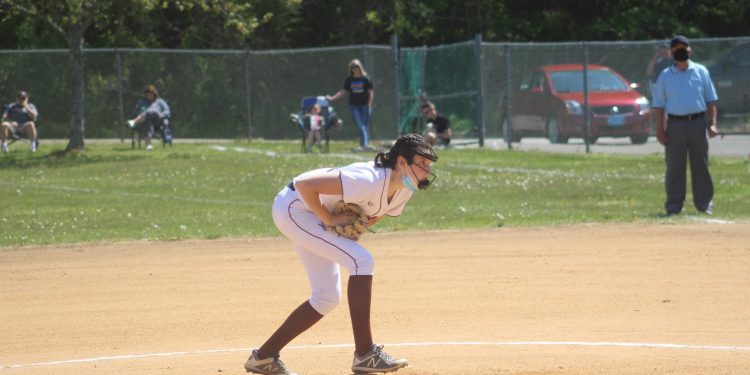 TORRINGTON: It’s the little things that usually separate a win from a loss.

Not the big three-run home run or bases clearing triples but the little things.

We didn’t have any of those big things on Saturday morning (10:30 start) when the Torrington softball team fell to Oxford by a 2-1 final.

Now the fact that the home team had the winning run come to the plate in the bottom of the seventh speaks volumes to what an excellent game the coffee drinking crowd got to see before lunch.

It was also another example of how this Raider team is growing and getting better against the top teams in the Naugatuck Valley League every time they meet.

Remember, a great deal of this team (like others) lost a season in 2020, making this sometimes their first varsity softball experience even though they may be sophomores who should have had some of the growing pains under their collective belts by now.

The Wolverines (13-3) were coming in fresh off handing Wolcott their second loss of the season on Friday afternoon in a 7-0 victory.

So, you can’t blame second year head coach Sara Arburr for not knowing what to expect coming in but pleasantly surprised when she left.

“We have really found our presence on the field,” Arburr said. “They surprised me a little bit today. This isn’t the path I thought we were going to go today but we competed against a phenomenal team that beat Wolcott last night.”

This game had been on the books as the Raiders home opener back on March 14th but had to be postponed because of a lack of umpires that afternoon but on Saturday morning, the boys in blue were on hand 45-minutes before first pitch.

The visitors struck first. After leadoff batter Madison Sastram doubled to deep left and scored on an infield out.

Raider sophomore Amelia Boulli, who continues to mature as a pitcher in her first year on varsity even though she is in her sophomore year, settled in nicely after the first inning run.

Boulli struck out the next five batters she faced, using a devastating change up to go along with a terrific fastball.

The Raiders put together a two-out rally in their half of the as Breanna Murrelli and Amelia Russell singled and moved up on a wild pitch but Boulli was called out on strikes to end the frame.

Maddie McLaughlin led off the bottom of the third with and infield single and was sacrificed to second by Marissa Burger but a ground out and a pop up stranded her at third.

”We’re putting the ball in play but struggling to string the hits together” Arburr said.

Oxford would push across their other run in the top of the fourth, taking advantage of an error that led to an RBI single by Lindsay Buinauskas for a 2-0 lead.

Torrington would break onto the scoreboard in the bottom of the fifth as Russell (2-3, run scored) continued to make things happen for her team with a leadoff double that helped by an error, had her on third with no one out.

Leaving a runner on third in this situation is something good/great teams rarely do and while no key hit was involved, a wild pitch got the job done.

Boulli meanwhile, worked a perfect fifth and worked around errors in the sixth and sevenths inning to keep her team in it but those key hits were not to be.

Making the routine plays, avoiding the costly errors and coming up with those key hits.

Those are the thing that make the difference.

Their coach summed it up.

“When we eliminate those little things, it’s just going to elevate us even more.”

Little things that could lead this team to the higher air in the NVL and around the state come State Tournament time.