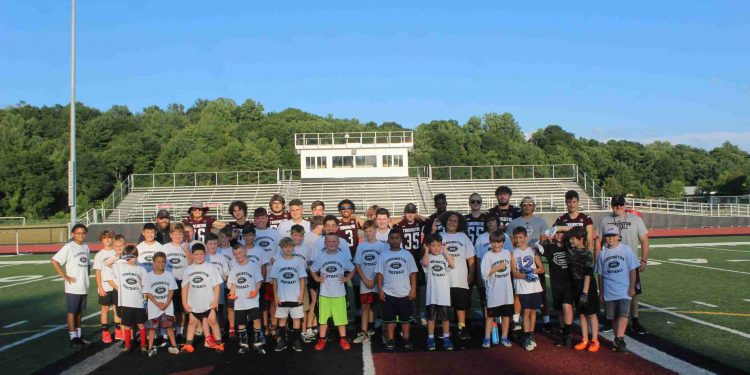 TORRINGTON: The feeling amongst the members of the Torrington football program has always been embedded in the notion that they are a family.

This week, just before the Robert H Frost Complex closes to the public for the remainder of the summer as parking changes are worked on, the Raiders football family got back to something they had been unable to do since 2019.

Torrington is coming off a campaign that saw them advance to the semi-finals of the Class M State playoffs a year ago and this ends this effort allows the players to give back to the next generation of players and they did so with enthusiasm.

Drills were held in all aspects of the game from proper tackling techniques to agility tests while stressing the positive every step of the way.

This is the second such camp run bt head coach Gaitan Rodriguez, the first was in 2019 before the pandemic and what impressed the coach the most was his players efforts.

“Look at them.” Rodriguez said, “They are really into this. It’s the best part for me, watching them do the teaching. It can help them understand some of the things I’m looking to teach them as well.”

The camp wraps up tonight.

Torrington begins their regular season on the road against Wilby on Thursday, September 8 at Municipal Stadium.

The Raiders have home games against Wolcott, Ansonia, Woodland, Gilbert/Northwestern (GN joins the Naugatuck Valley League this year), and Naugatuck with additional road games versus Crosby, Seymour, Holy Cross and the season finale at Watertown on Thanksgiving Day.

Players who took part in the camp