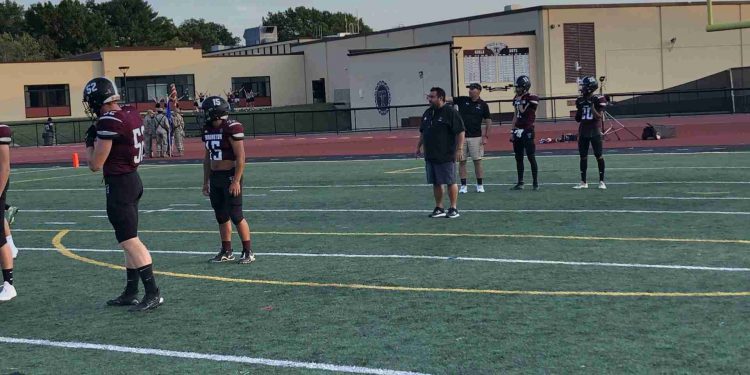 Raiders hold on for 14-13 win over Wolcott

TORRINGTON: After watching a successful point after attempt by Wolcott kicker Matthew Johnson almost land in the construction zone in front of Torrington High School, seeing him line up for a 43-yard potential game winning field goal was hard to watch.

When his kick went wide left with 13-seconds to go, Torrington football fans could exhale as their team came away with a hard-fought 14-13 win to improve to 1-1 on the year.

It was the home crowds first look at a Raider team that is far different from the team that made it to the Class M semi-finals a year ago but one that passed a big test in week two of their campaign.

A week ago, Torrington led going into the fourth quarter against Wilby but could not hold the lead, falling 30-20.

On Friday night, in front of a large and energized home crowd, the Raiders grew up some, playing with emotion while showcasing some new talent on the offensive side of the ball.

Returning players Mason Stannard, Brett Fairchild and Matt Adams are impact players on offense and were joined Friday night by a pair of sophomores. Michael Ahoua and Kel Camara provided sparts for Torrington.

The counter plays put in place by the Raiders caught the visitors on numerous occasions; it’s the challenge for teams who face the single wing offense.

Who’s getting the ball?

On Torrington’s second drive of the game, the Raiders started at their own 27 and got several punishing runs from Fairchild, who will not be easy to take down for teams this season before Ahoua took the reverse handoff, rounded the left side and was gone from 43-yards out for the games first score.

Adams booted the extra point, a key part of this game, making every point count and the home team had a 7-0 lead.

The score at the half remained 7-0 but could have been more as the Raiders were unable to capitalize on an interception and their defense turning the Eagles over on downs.

Wolcott quarterback Anthony Bell used a array of completions in the first half to give his team good field position. That, coupled with the methodical running of Matthew LaMontagne (27/168) pushed the home team’s defense.

That “D” was up to the task late in the second quarter when they held on a fourth down pass from Bell that fell incomplete.

Would missed chances haunt the Raiders?

As the second half began, Bell blasted out on a 57-yard run to the Raiders 12-yard line.

On the next play, LaMontagne went in from the 12 and after a successful point after by Johnson (with plenty to spare) this one was knotted at seven with the momentum on the visiting side.

It continued to flow that way as Torrington went three and out but got a terrific punt from Stannard to put Wolcott at their own 26.

Torrington held on defense, forcing a punt by the Eagles that was downed at the Raiders 8-yard line.

This turned out to be one of the defining series in this one.

Wolcott had turned the field position battle to their favor. A stop here could have changed everything, but the home team showed some grit and determination, getting big runs from Adams (14 yards on first down) and Camara.

The speedy sophomore showed why he will be dangerous this year with an electric 47-yard touchdown run that but the Raiders up 14-7 after Adams was successful with the PAT.

It was 14-7 as the fourth quarter got underway and Wolcott was not done yet as LaMontagne scored from 14-yards out to make it a one-point game at 14-13.

Considering the big leg the Eagles had in Johnson, it looked like a tie ball game before his extra point went long but wide right.

The Raider defense held the next time Wolcott got the ball, foiling another fourth down try by the visitors.

The visitors had one more chance after stopping the home team on a fourth and 6 from the Eagles 13.

They would drive to the Torrington 27 when they opted for the 43-yard try which went wide right and the home crowd had themselves one heck of a home opener for the 2022 season.