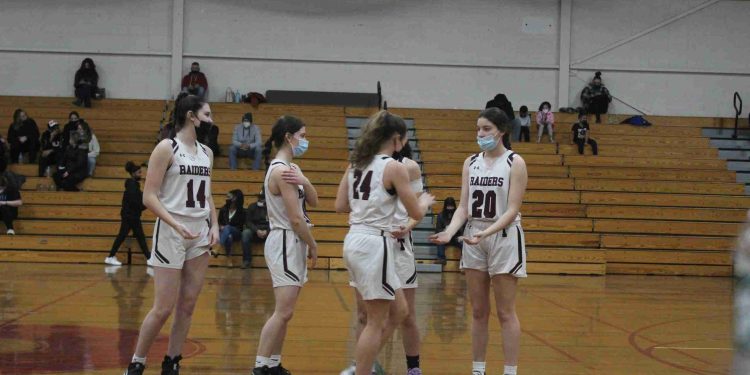 Raiders push Crusaders to the brink before falling, 64-62

TORRINGTON: When the unbeaten Holy Cross Crusaders jumped out to a 22-10 lead over the Raiders girls basketball team on Thursday night, head coach Mike Fritch had words of advice for them after the first eight minutes.

“I told them that they were playing their (the Crusaders) game,” Fritch said. “They like to play the up-tempo fast paced game and we can’t do that, so I told them to slow down.”

The Raiders did just that and played with or above one of the best teams in the state the remainder of the way, nearly knocking off the Crusaders before falling, 64-62.

No team this year has been this close to Cross at the final buzzer, the closest had been non-league opponent Mercy who lost by a 55-51final early this season.

Most other games have been blowouts but against the Raiders, the Crusaders learned that this is a team that can come at you in so many ways.

For one, tis team is tenacious and doesn’t give up. That 12-point deficit after one, gone after a 21-11 Torrington second quarter.

The vaunted Holy Cross press? While bothersome, it was taken off after the Raiders continually beat it, led by the efforts of Marissa Burger who slowed the game down, didn’t run into the teeth of the press and found open teammates.

This team has shown that if you focus on one or two players, others will step up and hurt you.

Marissa Burger and her sister, Haley may be near the top of the scoring summary most games but others, like Amelia Boulli (team high 21 points) and Rachel Brewer-Karimi (13 points) fueled the comeback and put the visitors on their heals most of the second and third quarters.

Boulli, also a junior, was big on the boards with 10, including five on the offensive glass.

“We have outrebounded most teams this year,” Fritch said. “It’s made a huge difference.”

Their ability to play together comes from doing so for many a season, pre-high school and a lack of selfish play.

“There are no egos on this team,” Fritch said. “They share the ball well and execute the plays.”

Players like Brianna Murelli may not show up in the box score with big numbers but is there a tougher kid on the court, especially on the boards?

” How tough is Brianna?” Fritch asked. “It’s amazing to see how she battles to be in the right place all the time.”

It’s a fast turnaround for Torrington, who host Wolcott, a team they beat by 11 on the road earlier this year but after an emotional two games this week (a 52-23 final over Berkshire League foe Northwestern) and the Cross game, staying up will be important.

The Raiders now sports an 11-5 mark with four left in the regular season.

After tonight, they travel to play Ansonia on Monday, play their final regular season home game on Tuesday against Naugatuck before heading to Waterbury to take on Kennedy on Thursday night.