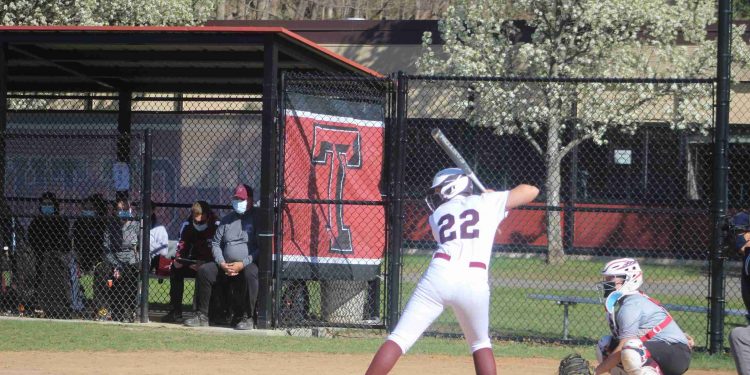 Raiders softball fall to “Hounds but grow in the process.

Torrington: So far in the spring of 2021, the Torrington softball teams have experienced some extremes, both when winning and losing.

They had one close game, a 5-1 season opener at Watertown before their matchup today against rival Naugatuck, a team that had played common opponents closer.

Coming into play on a cold windy Monday afternoon against a quality team presented the Raiders with an opportunity.

An opportunity to change the narrative by staying with or beating one of the upper echelon teams in the Naugatuck Valley League.

Despite dropping a 6-4 decision to the ‘Hounds, consider the mission accomplished on multiple fronts.

First, the Raiders showed grit after falling behind 6-0 going to the bottom of the fourth inning.

The visitors had put up a pair of runs in the first, a single run in the third before plating three in the top of the fourth.

Was this going to be a “here we go again” moment with a blowout looming?

Not this time, much to head coach Sara Arburr’s delight.

“I saw a completely different team today,” Arburr said. “Today was the first time that I saw them play with the intensity that I know they can play with.”

The comeback began in the bottom of the fourth when freshman Aubrie Jones walked and came around to score on a long double by Brianna Murelli.

In the bottom of the fifth, the home team scored three times and while scoring three times was great, how they scored even better.

Starting pitcher Amelia Boulli (more on her effort in a moment) led off the frame by reaching on an error, as did pinch hitter Shalyn Neary.

A single by Marissa Burger (2-4, run scored) loaded the bases with no outs.

Scoring multiple runs in this situation is critical for teams and the home team didn’t waste the chance.

Haley Burger did what her teammates had done by putting the ball in play on a grounder to short that plated Boulli, who beat the throw to the plate on a fielder’s choice.

Maddie McLaughlin did her job as well with an RBI ground out which was followed by a sacrifice fly by Jones, making it a 6-4 game.

On the mound, Boulli, a sophomore, started making adjustments to her game and it paid off, just ask her coach.

“I would say that today was the best that I have seen her throw so far,” Arburr said. “One thing that we have been discussing lately is the importance of hitting spots. To be able to execute pitches. There are batters who are great hitters that you want to pitch around and if you can’t place your pitches in the right spots, they’re going to hit some bombs off of you.”

For her part, Boulli kept the Greyhounds off the board while her teammates climbed back into this one, one batter at a time.

Boulli got some defensive help in the form of two double plays off liners, one started by Haley Burger at second in the fifth, the other an unassisted twin killer by Amelia Russell on a liner to first to end the visitors seventh.

Torrington had the tying runs in scoring position in the bottom of the frame after a walk to McLaughlin and a booming double by Jones but could not push them across.

Still, the Raiders showed they could compete against a quality team that had jumped on them early.

In that regard, their coach thinks they discovered something.