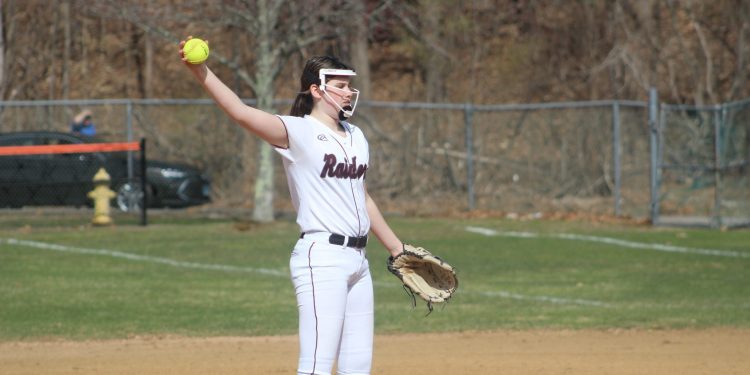 TORRINGTON: This was the win they had been searching for.

For most of the 2022 campaign, the Torrington softball team had gotten close to a few signature wins but aside from an early season win over Holy Cross (8-1 in game two), the had fallen short.

They had another opportunity on Monday when the Seymour Wildcats came to town with their 8-5 record, just behind the Raiders (9-5) in the crowded upper regions of the Naugatuck Valley League standings.

Would this be the day coach Sara Arburr and company would break through?

After a two run first inning put the home team up quickly, thanks to RBI’s from starting pitcher Amelia Boulli and Haley Burger, things looked up.

In that opening frame, leadoff batter and all-around catalyst Rachel Brewer-Karimi led off with a single, stole second and took third on a wild pitch. Two outs later, Lilah Boulli walked, putting runners on the corner.

Amelia Boulli then lined an opposite field hit that landed down the left field line for the first run batted in of the game and stretched it into a double, putting runners on second and third with two outs.

Two out rallies are a team and their head coaches’ best friend and the fun continued when Haley Burger lined a single up the middle for the 2-0 score.

Getting off to a fast start was important for the home team; keeping that lead was even more imperative.

Too often this season, the Raiders have had THAT inning. The inning that derails the train and on Monday, that slippage of the freight train off the steel occurred in the visitor’s half of the third inning.

Boulli had escaped trouble in the top of the second after hitting the leadoff batter but escaped by stranding the runner on second with a pair of strikeouts.

A hit batter started the trouble in the third and a single added to the jam.

Two key errors followed though, and when the dust cleared, the home teams lead was gone, and they trailed 4-2.

How would they respond?

Would this be another game that got away from them?

There is too much talent on this team, they were due for a comeback.

The comeback started with their ace, Boulli who retired 13 of the next fourteen batter she faced, striking out six, including the side in the sixth as her teammates battled back.

The key for the junior hurler?

“I couldn’t think about what happened in that inning,” Boulli said. “I just had to focus on what I was doing.”

In the bottom of the fifth, the number nine hitter, Olivia Rinaldi led off with a hard single and went to third on a single by Brewer-Karimi.

On a grounder to short by Brianna Murelli, the Wildcats chose to go home but Rinaldi slid in safely.

Torrington continued to make things happen by putting the ball in play when Marissa Burger hit a hard grounder to short and with Brewer-Karimi running from third, the visitors took the out at first, but the game was tied at 4.

Life was back in the home dugout as they had shown themselves that if they believed and persisted, good things would come their way.

With Boulli now in control on the mound, the Raiders went to work in the bottom of the sixth. They got help from Seymour as an error on a grounder to third was mishandled, allowing Haley Burger to reach base.

A strikeout and a grounder back to the mound left Burger on second with two outs and Torrington in need of a two out, clutch hit.

That hit came from Rinaldi, a player who had been struggling but had shown some pop during batting practice.

Good contact was the order of the inning and indeed Rinaldi lined a single down the leftfield line that evaded the Seymour leftfielder, putting Rinaldi on second and her team up 5-4.

Boulli would take care of the rest, even though the visitors put two runners on with two outs in the top of the seventh.

Today though, it was the Raiders who owned the two out hits.

The win leaves Torrington with a 10-5 mark as they get ready to host Wolcott on Wednesday.

Torrington dropped a 6-4 decision to Wolcott last week in a game that they should have had if not for numerous errors.

St Paul (5-8) is next on Friday in Bristol before Torrington plays their last regular season home game against rival Naugatuck (9-5) next Tuesday in another big test.

Their last regular season game is two days later when they travel to Winsted to take on Berkshire League foe, Northwestern (10-2).

Today was big. It shows the Raiders, when they control the miscues, can play with just about anybody.