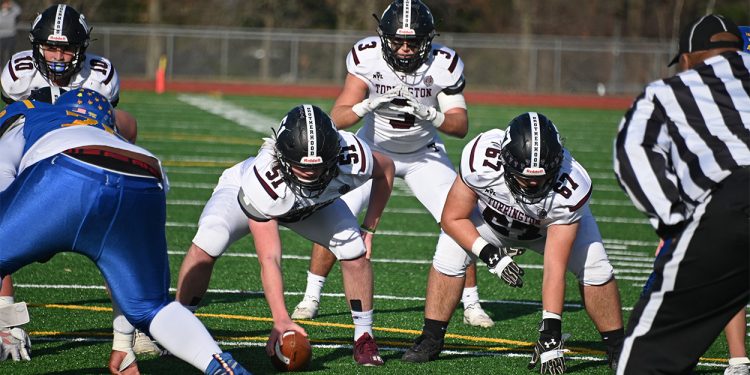 Rockville moves on to the Class M football finals

However in Sunday’s Class M semifinals, it didn’t happen for the Raiders in a 42-12 loss to Rockville. It wasn’t due to a lack of effort on Torrington’s part. Rockville simply wouldn’t allow it.

The Rams scored on six of their first seven possessions of the game and used their quickness to disrupt the Torrington single-wing offense that had served the Raiders so well this season.

Torrington marched down the field on their opening drive, scoring on a 15-play, 59-yard march that ate up 8:26. Sean Clinkscales scored from the six yards out to give the Raiders an early 6-0 lead. The extra point try failed.

Rockville stepped up their game and the Raider offense struggled much of the remainder of the game.

“We didn’t make any adjustments as a coaching staff,” Rockville head coach Erick Knickerbocker said. “(We told the kids), ok, we can basically play with them. We just need to turn up the physicality. It was more confidence for the kids realizing they can play with these guys.”

“Rockville is a very good football team,” Torrington head coach Gaitan Rodriguez said. “They played very physical up front. I don’t know if we just ran out of gas but some days you just don’t have it.”

Travon Edmondson ran for 124 yards and three touchdowns on 22 carries for the Rams while Amir Knighton ran for a game-high 179 yards on 10 carries. Rockville’s Deshaun Perry ran for 18 yards on six carries and caught five passes for 83 yards and a pair of touchdowns.

“They were very difficult (to stop),” Rodriguez said. “It appeared they were going off tackle and then, they go outside. We would get guys on them (for tackles) and they were able to bounce off. Some of those guys are powerful. They really have some good athletes.”

Clinkscales had a team-high 132 yards and two touchdowns for the Raiders (8-4), including a 64-yard touchdown run late in the fourth quarter. Semonich was held to 46 yards on 16 carries.

The Raiders felt good after their opening drive of the game that resulted in a touchdown and a 6-0 lead. Clinkscales and Semonich each had seven carries on the drive.

But Rockville quickly tied the game with a six-play drive that took just 2:20 with Edmundson scoring from the four-yard-line. The game was tied 6-6 when the Rams missed their extra point.

On Rockville’s next drive, the Rams went 60 yards in less than two minutes with Edmundson making the big play on the drive, a 35-yard scamper to the Torrington 7-yard line. Edmundson scored two plays later and the Rams grabbed a 13-6 lead.

The Rams extended the lead to 21-6 when a wide-open Perry scored on a 21-yard pass from QB Matt Ryan and Edmundson scored on a two-point run with 4:52 left in the first half.

Rockville’s defense stiffened. Clinkscales was dropped for a three-yard loss on first down and the Raiders threw a pair of incomplete passes. The fourth down pass was picked off in the end zone.

The Rams left no doubt of their control of this game with a dominating drive to open the second half.

Rockville marched 53 yards on five plays in 1:25 with Edmundson scoring from the nine-yard line to open the lead to 28-6. Knighton had a big 26-yard run in the drive.

Rodriguez was in tears talking to his team for the final time after the game. With the cancellation of the season a year ago due to the COVID-19 pandemic to the state semifinals, it was quite a journey for the Raiders, who were looking for their first finals appearance since 1983.