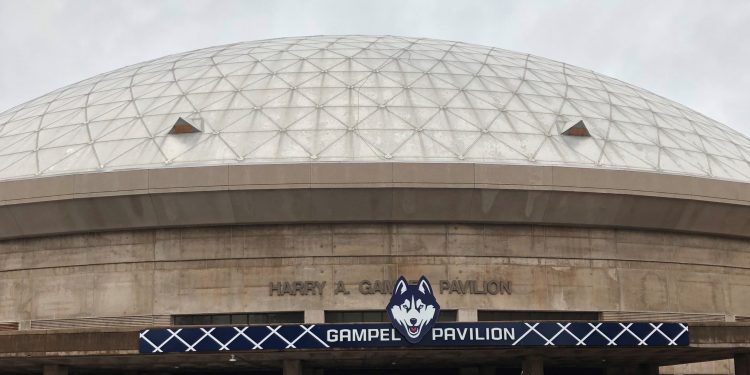 STORRS – It was hardly a weekend to remember for Adama Sanogo.

The UConn sophomore, who is in the running for the Big East Player of the Year, battled foul trouble at both Xavier and St. John’s and struggled to stay on the court as the Huskies split the two contests. In the two games combined, he only registered 19 points and 12 rebounds and was visibly frustrated.

On Wednesday night against Seton Hall, he didn’t commit his first foul until 2:50 left. Hardly coincidental, he nearly surpassed his stat line from the prior two games, overwhelming the Pirates in the paint with 20 points, 16 rebounds (nine offensive) and three blocks as No. 24 UConn knocked off the Pirates, 70-65, before a late-night sellout at Gampel Pavilion.

The solution to stay out of foul trouble sounded simple. Being able to execute the plan is a totally different matter.

“Today, I used my hands less (defensively),” Sanogo said. “Before, I was using my hands. That was my mindset coming into the game.”

“He was in the right spots,” noted UConn coach Dan Hurley. “He was on the wrong hip of a guy on the defensive glass, where he now has to lunge over and commits a foul. (Tonight), he was very fundamental. He wasn’t handsy. He was a beast.”

Sanogo all but sealed the win with a one-handed floater in the lane to give the Huskies a 10-point lead with 1:18 left. It was fitting capper for UConn (18-7, 8-5 Big East), which was saved by Sanogo’s first half. Despite make only 1-of-10 on threes, UConn led by one at the break thanks to Sanogo’s physicality in the paint. He had nine rebounds and two blocks in the half, keeping the Huskies afloat.

“Last time we played Seton Hall we gave up almost 100 (90) and we knew we had to play better defense,” he said. “The only way we were going to win was by playing defense. We wanted to keep them around 60 this time.”

Sanogo was not alone, however. Tyrese Martin added 16 points and had another strong rebounding effort, finishing with 10. Last week versus Marquette, the senior guard had 15 rebounds. R.J. Cole also scored 16, while Andre Jackson, who was all over the place defensively, led the Huskies with six assists.

“When you have three guys playing at an all-conference level in a game or throughout the season, you have a good chance of winning,” Hurley said. “Adama, R.J., and Tyrese all played like all-conference guys today.”

Seton Hall (15-9, 6-8) was led by Jared Rhoden’s 14 points with Kadary Richmond notching 13. The Pirates only shot 43 percent and every time they got the lead down to the six-point range in the second half, UConn, which was plus-10 in rebounds, had answers.

“Seton Hall is one of the best teams we’ve played this year, one of the best coached and one of the toughest to beat,” Hurley said. “In the second half, we were better offensively (57 percent). In the first half, we missed some easy ones, and they are hard to score against because of their length.”

Hurley said the team is not looking at their current schedule as a “revenge week.” It’s hard not to view it that way, though. This win avenged a tough overtime loss to the Pirates in Newark last month.

On Saturday, Xavier comes to Gampel after beating UConn last week. Then next Tuesday, Villanova, which handed dominated the Huskies earlier in February, visits Hartford. Hurley may not look at it as revenge, but at the same time, doesn’t short-change the importance of these games.

“For us, this is a week where we have a chance to take a big step,” Hurley said. “(It’s important) to beat NCAA (Tournament) caliber teams for our resume and to be in a place where we’re not behind the eight-ball and to take the next step.”

The step taken on Wednesday was critical because Sanogo was on his feet instead of sitting on the bench. UConn, simply, is at its best with him on the court, a sight the team needs to see with tournament time around the corner.