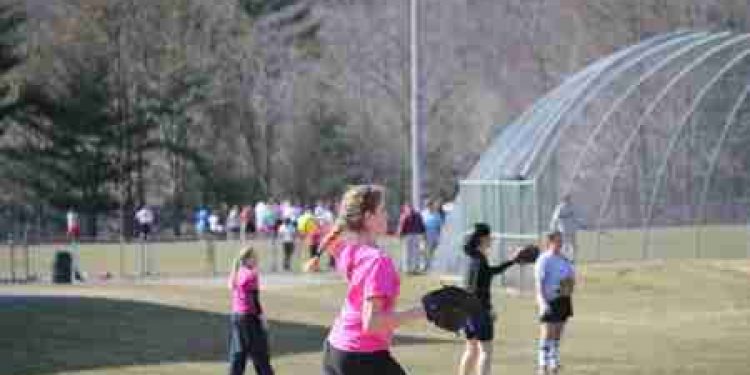 TORRINGTON-To have one hard throwing, tall, athletic workhorse of a pitcher is a blessing for any girls softball team.

To have as many as four is an absolute blessing.

For Torrington girls softball coach, Maryann Musselman, the latter is a luxury she now sees herself possessing.

Musselman, who enter her eleventh season at the helm of the Raiders, has a sister duo who may just turn some heads in 2011.

The Matzko sisters, senior Chelsea and freshman Sydney, are going to present a different set of problems for opposing teams.

The senior is a tall (5’10”) right who throws real hard. The ninth grader may be a tad shorter than her older sister but comes at batters from the left side with considerable power.

Both play softball year round, both should have little problems adjusting to a rule change that pushed the mound back three feet this year from 40 to 43 feet.

The movement of the pitching mound back those three feet may contribute to an up-tick in offense this year, only time will tell.

After the two hard throwing sisters, the Raiders are blessed with two other strong players who can toe the rubber in senior Molly Bartles and Nicole Jamieson, another freshman.

“I will probably live and die with one,” Musselman said, “But it’s nice to have back-ups.”

“We will still be in a rebuilding mode this season,” Musselman said, “We have some pitching but need to work on our offense.”

A Raiders team run by Musselman can always be counted on for a great defensive effort and good pitching.

Perhaps the movement of the mound back that three feet can help the players see the ball just a little longer and help the THS offense.

The Raiders tri-captains will consist of the older Matzko, Bartles and senior catcher Talia Zabarra.

Numbers are up for the Raiders this year after a multi-year decline in participation. 23 players have come out this year, giving Torrington a junior varsity and varsity team for the first time in three years.

Musselman has high hopes for the sister combo; one may have All-State ability.

“Both girls are very sound mechanically,” Musselman said, “They know one speed, fast and the both work hard all the time. Sydney may turn out to be something very special.”

Alyssa Michnivtz and Kylia Okenquist, two more seniors, will patrol two outfield positions with the third to be determined.

Jamieson will take second at the moment when not needed on the mound while Bartles will be at short.

Chelsea Matzko will give her infielder a tall target when she plays the field at first.

Musselman expects a battle with the usual suspects in the Naugatuck Valley League.

“We need to beat the teams we should and try to steal one or two from the big dogs,” Musselman said, “I’d like to see us try and kock off Woodland or Wolcott and maybe even Seymour if we can.”

Looks like the arms race is on in Torrington this season and this Raiders teams appears ready for battle.

Action kicks off for THS on Thrursday, April 7 when they travel to Waterbury to take on Kennedy at 3:30.