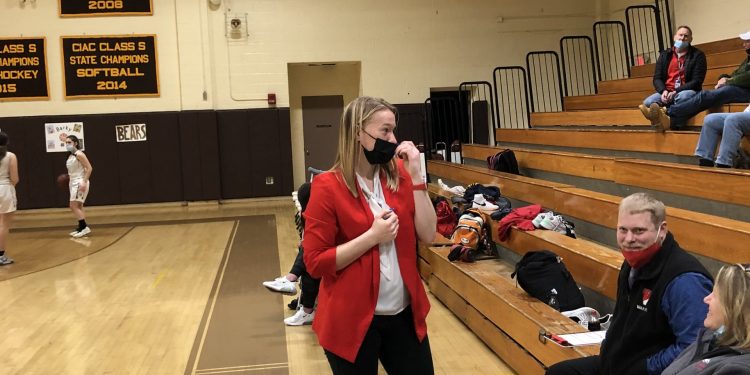 Stolle has Wamogo girls program on the rise

THOMASTON – Nobody brightened up the Thomaston High gym Saturday morning than Kerri Stolle. The Berkshire League Girls Basketball Tournament was in the house and Stolle had her Wamogo team on hand to do battle with league champion Thomaston.

Looking resplendent and chic in a striking red suit jacket and a matching pair of heeled Converse All-Stars Stolle lit up the gym long before any player took the floor.  The cool thing is that she may even have felt better than she looked.

Stolle was almost giddy in anticipation of hopping in her car and driving to New Jersey after the Warriors’ 11:30 game to pick up her new pit bull puppy.  The result of the game was not going to dent the smile. Hey, a puppy is a puppy.

But there was a basketball glow evident, too. The Warriors would get overwhelmed by the Bears, 67-21. But it was expected in a No. 1 vs. No. 8 matchup. The Warriors scrapped on the floor and their presence was the bigger story.

Just a year ago the Warriors were in dire straits. There was no Junior varsity team and just eight players and that number was only reached when the team manager was put into uniform.  The inclination was to play a junior varsity schedule but in favor to the BL they played varsity and took their black and blue lumps. It wasn’t a stretch to think extinction and to a degree it was hard to figure.

The Warriors are not a program without a proud past. One of only three Berkshire League schools to win a state title (1995) joining Thomaston and Northwestern Regional and at one time a winner of six consecutive league titles. Victory was a consistent companion not an occasional drop by. There are names that found the record books and 1,000-point banner on the wall – Clan Stolle led by Tracy with 1,924 points, sisters Kerri and Kristi, Katie Matthews, Trish Neary, Sandy Mosley and the list goes on.

There were more than a few good times. It is a a successful past to look up to. So what happened? School numbers are down all over but not to the extent that usually threatens a mainstream program.

“We lost our feeder programs,” said Stolle. “The Route 44 program had three girls and one niece. One town had good numbers the other two towns not enough.  The rec programs had low numbers.”

But, the worm has started turning. Stolle credits Litchfield Park and Recreation Director Colleen Kinkade with rebuilding the rec program which now has more than 100 kids in grades 1-5.  As a sixth grade teacher at Wamogo Stolle has worked to build interest.

This year’s team with help from the Agriculture program is up to 12 players. There are 23 girls on the Middle School team.

“That’s awesome for a varsity coach to hear,” she says.

The Warriors (3-18) tasted some victory this year. A nice three-game win streak with victories over Hale Ray, Terryville and Litchfield. Never underestimate the impact of having the higher score.

“We needed (the wins),” admits Stolle. “When you work hard and put the time it’s hard not to get the awards. You can only tell them to do that so many times.  We found a system that works. We talk more, we’re better passers. I’m super proud of them this year.”

Call it `The Rising.’ A nice step forward this season. Stolle was feeling good before she got her puppy Saturday. By the end of the day she was feeling great. “