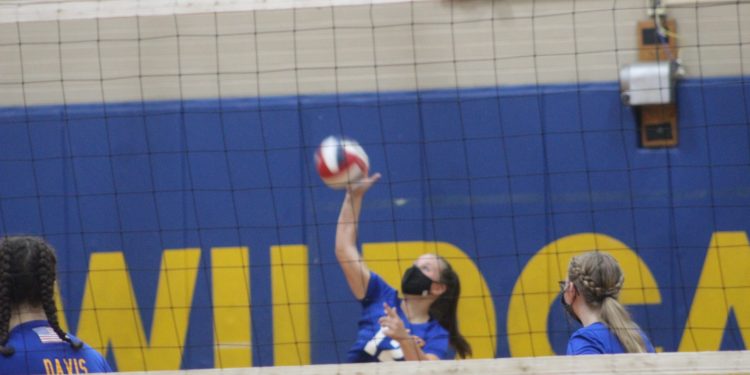 Tech Girls Volleyball Off to a Torrid Start to 2021 Campaign

The early tear that the Wolcott Tech girls volleyball team is on as we work our way into the first week of October is somewhat of a continuation of a fine showing the team put in during the COVID-19 pandemic abbreviated 2020 campaign when the Wildcats posted a 6-1 record.

And Tech has been on a tear, winning its first nine games of the season and, get this, dropping only two games in those nine contests. The only time the ‘Cats were really tested was during a 3-2 comeback win over a very good Kaynor Tech squad Sept. 17 at Tech’s home court.

Along the way, Tech, a member of the Connecticut Technical Conference in which it is undefeated this season, has beaten O’Brien Tech twice, Gilbert, Wright Tech, Bullard Havens Tech, Abbott Tech, Wilcox Tech and Platt Tech, the latter this past Thursday. Whether it’s at home or on the road, it doesn’t seem to matter to the wildcats. They are just that dominant, beating all eight teams besides Kaynor Tech by 3-0 scores. Now that’s the very definition of domination for you.

Head coach Ray Tanquay, who is in his 10th year as head coach and is getting assistance from Jim Pepper and Karkin Foster this season, whom he calls a “brotherhood coaching staff”, pointed to the Kaynor Tech win as pivotal during the first half of the 2021 campaign.

“That was a nice win. We were down, 2-0, versus a defensive minded Kaynor Tech squad and won the next three sets to take the match. Our win over Gilbert was a great match played by both teams.”

Tanquay said, “The girls are currently 9-0 and they remain focused to make the most of every moment. They stay late in the gym every day to get extra practice and touches on the movement on the court.”

Tanquay called his squad a “hard working family unit” with the older players taking leadership to “a new level”, working with the younger players to leave a “lasting legacy.”

Tech has been able to develop a consistency through strong upper-class leadership and veteran poise on and off the court, mixed in with some young players who are ready to step up into important roles if needed.

This isn’t the first time that the Tech girls volleyball team has found a successful formula, The wildcats have made it to the state tournament six times in the last 24 years, many of those years playing against stiff competition, with its deepest run a magical journey to the state semifinals in 2002. Is this team poised to do something special again this season?

“Our team has strong leadership on and off of the court,” reiterated Tanquay.”They are working hard to leave the gym better after every practice and game. The team has often discussed how important every moment of the season is after having the season last year cut short because of COVID. They are very appreciative of the opportunity to play and practice the game they love.”

Tanquay said that he and the other coaches have been very pleased with the way their team has performed.

“Overall, we are impressed with the performance, dedication and daily improvement of this team. They believe and have a plan in place to follow their mission to work themselves deep into the league and state tournament.”

Tanquay knows there are tough games ahead on the schedule. He looks to a rematch with Kaynor Tech on the road next Friday as one of the biggest tests his team faces the rest of the regular campaign. Other clubs he has an eye on to cause his squad some trouble are Gilbert next Thursday on the road, Housatonic on the road Oct, 12 and Whitney Tech at home on Oct. 20.

The first round on the CIAC state tournament is on Nov. 8.

The season has gone ideally for the Wolcott tech girls volleyball team. But they, and their coaches, know there is a lot f work left to be done to get to where they want to be at season’s end.