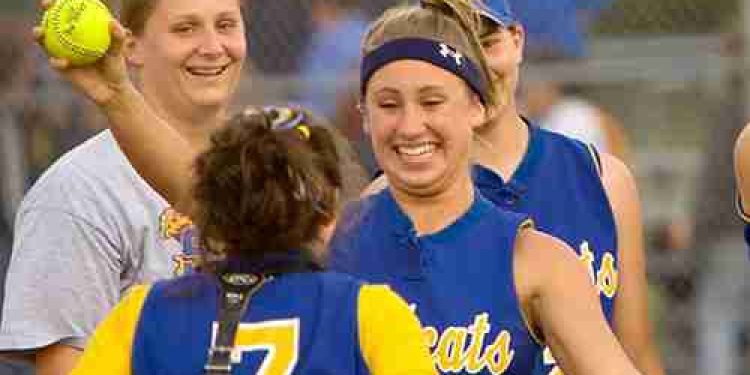 The remarkable career of Seymour softball star, Danielle Liska. From the May LCS Magazine

The longer the playing days sink into the past, the better the numbers get.  You know how it works. The memory does a little script revision and the .275 batting average becomes .350. The 1,000 yards gained becomes 1,500. The point totals move upward like a cost-of-living increase. The average player becomes the awesome dude or dudette.

Maybe we all have walked in that world to varying degrees. So, pity Danielle Liska. Even if she was so inclined, she can’t do that. After all, how do you pad perfection?  The brilliant former Seymour softball star never lost a game in high school. Never ever. From 2003-2006, she toed the mound 50 times. And 50 times the opposition wept. Or at least lost.

We live in a softball pitching-rich area. If you want to go back a ways there were drop-dead arms that belonged to the likes of Mary Percy of Shepaug, Heather Baehr of Lewis Mills, Lisa Hurlbert of Thomaston, Terri Bambakidou of Torrington and Pat Conlan of Holy Cross.

In more recent times there was Terryville’s Jamie Bridge while Seymour has offered a host of brilliance with names like Shelby Slie, Kim Bogen and the Gefferts, Raeanne and Jenna. Oxford had Ashley Guillette and Holy Cross Sarah Lawton. Of course, Torrington has produced Sydney Matzko and currently one of the nation’s top pitchers in Ali Dubois (Boston University).

And after you role perfection around the old cerebral cortex for a bit and throw in a couple of state titles, you get to the state tournament her senior year. I was fortunate to cover those four games and haven’t seen anything like it before or since.

Back-to-back perfect games in the semifinals, a 10-0 win over Brookfield, and championship game, an 8-0 blanking of Lauralton Hall. Not just shutouts or no-hitters but perfect games. She struck out 32 in those games and 51 of the last 64 batters she faced in the tournament. Only 10 balls were put in play and six were bunts. During the tournament she gave up one hit.

A perfect way to end a perfect career. Just for the record, the 2005 tournament wasn’t bad either. Two no-hitters, one run, three hits, and 60 strikeouts. A two-time finals MVP.

When you witness brilliance at that level it sticks you. So, I reconnected with Liska recently. She works for a software company and lives in Shelton.  The last time we had talked was at West Haven High School’s Biondi Field. She was a 17-year-old in the throes of a state championship celebration, just minutes after reducing the Lauralton Hall bats to firewood without a mark on them

As I wrote at the time:  Perfect Pitcher – Perfect Game – Perfect Season – Perfect Team – Perfect Champions. She had put the utmost dazzling punctuation mark on an unsurpassed career and completed a season with a 26-0-mark, 0.17 ERA with 13 no-hitters and six perfect games. Throw in 361 strikeouts in 165 innings.  Opponents didn’t hit Liska, they worked on their walk. Back to the bench.

I wondered what she thought about it all 14 years later as a 32-year-old young woman. I mean, there was and will always be a lot of perfection surrounding that time. As effervescent as ever, she appreciated the title more than the jaw-dropping individual magnificence.

“I was just a young kid. If I think about the personal moment it was probably just dumb luck,” she laughed. “It all just worked out. I just wanted to get to the end of the game and I didn’t care how I got there. In those games, I was totally clueless. If I realized I had perfect games it would have gotten into my head. We just played out after out.”

Liska assuredly wouldn’t get much agreement on dumb luck part.

“Danielle ranks in my top 10 pitchers to come out of New England,” said long-time pitching guru Neil Swanchak who spent time coaching at Seymour and runs one of Connecticut’s premier summer teams, the Connecticut Charmers. “She had great movement and other than Rachel Fico a superb riseball which was her go-to pitch when in trouble. She easily could have gone to play for D-1. We had UConn, Fordham, and UMass quite interested. I think mound-wise, her and (Raeanne) Geffert are inseparable.”

You want to know who the Geffert’s babysitter was? Danielle Liska. Now that’s a winning trio.

Liska threw darts but loved that riseball. Not so much for the opposition which had a better chance of lightning striking than hitting the ball. Highly respected pitching coach Joe Musante can take credit for that.

“The riseball had Musante written all over it,” says Liska. I threw it a lot. Hand (2005 title game opponent) called it high cheese. That’s where the movement came in. The curve was my second pitch. I never did quite get the drop-ball.”

“Speed, movement, poise, control – Danielle has all the assets you would want a pitcher to have,” said Musante back in 2006. “She’s the best I’ve ever coached.”

Fico and Liska never pitched against one another but their careers did overlap for one year and brought out an interesting comment from Brookfield coach Frank Bonacci. As a freshman, Fico pitched a perfect game and a one-hitter against Brookfield while Liska had the perfect game against the Bobcats in the state semifinals.

“Both of them have a riseball and I’d like to see a game between the two of them,” said Bonacci. “I wouldn’t mind paying to see that.”

The only problem is that they might still be playing in 2000th inning with both teams still searching for their first hit and each pitcher having 4,500 strikeouts. A little note here, unlike Fico, Liska did not pitch all four years because the Wildcats had another legendary hurler in Slie throwing.

Liska bypassed the D-1 route and went on to Babson College – “It was small and well known for business which was what I thought I wanted to do,” said Liska. “Education was the focus for me. I knew I was going to play softball for four years but not after that. I didn’t want to prioritize based on softball.”

She posted a career mark of 45-27 and earned New England Women’s and Men’s Athletic Conference first team honors her junior year. Liska left the program as the all-time leader in strikeouts (488) and in the top five in seven different categories.

“It was no longer the NVL, it was the next layer,” said LIska. “There is a lot of talent on the college level and it is one through nine. It was much harder to work through the lineup every single time.”

Liska was elected to the Seymour High School Sports Hall of Fame in 2018. At some point, The Connecticut Women’s Softball Hall of Fame should be inducting a perfect pitcher.

Liska doesn’t think much about 50-0. It’s there but it shares a lot of time with the titles.

“It’s a memory in stone with the team legacy,” she says. “I never think about losing a game. As a program it was a great run. It’s never been about 50-0.”

From a distance, it was something to behold. Watching domination to the point of perfection. And imagine being able to tell somebody you were perfect without exaggeration. Danielle Liska gets to do that. Danielle Liska was perfect and you can’t pad perfection. Nor you can top it.