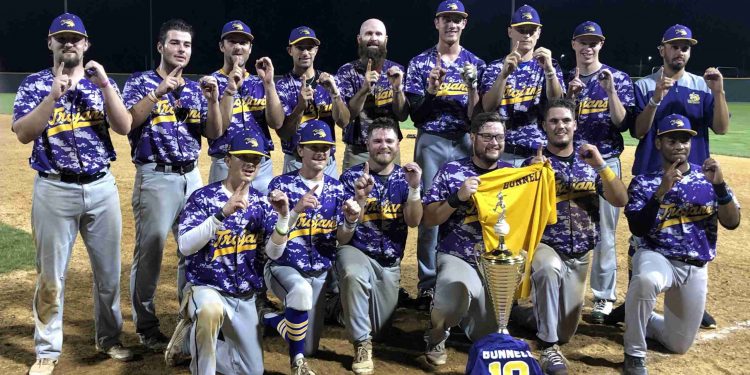 This Championship Was For Joe Bunnell.

Night of Tears. Night of good-byes. Night of grit. Night of rage. Night of smiles Night of class. Night tinged with a touch of the classless.  So much to drink in Friday night in the Tri-State League championship game between the Tri-Town Trojans and Terryville Black Sox at Municipal Stadium in Waterbury.

Where you fall on what transpired during Tri-Town’s, 8-5, championship clinching win is heavily inspired by who you were rooting for as it always is. Disgruntle and disappointment versus with victorious pride and in this case and extra sense of tearful mission completed. So much to take in and savor and a bit to spit out with regret.

It was all wildly entertaining, a worthy end to another summer of baseball. So, what do you take with you? If there was snippet of the night that will endure, that captured the lasing meaning of the night it came from Tri-Town player / coach Danny McCarty.

See this series and this season was so much more than just base hits, wins and losses for Tri-Town. It was about Joe Bunnell who died in March of 2020 due to an accident with a piece of farm equipment. It was about playing for the first time without the happy-go-lucky first baseman that had been with this team every year since its inception in 2005.

It was painful, there was emptiness. Every game and all the seasons and their experiences that go with endless summers on the diamonds of dreams are a reminder. First base was occupied with Joe’s brother Coleby, but it was empty without No. 10 standing there.

The Trojans played this season for Joe. They counted up to 10 (his number) before every game and then yelled his name. The greatest tribute to their fallen comrade was a title. So, McCarty struggled in victory. Smiles and unhidden tears in a bittersweet culmination.

“This means everything, he was here with us,” said McCarty futilely struggling more than he did with any fastball he saw this season with the tears cascading down his cheeks. “He was our Trojan hawk (reference to a hawk that has been on Bunnell farm since the day Joe died). Joe was with us the entire year. It means everything.”

McCarty’s somber, satisfaction amid a victory celebration on the infield sticks with you. Joe deserved and MVP award and he wasn’t there. But he was there. He was watching and smiling McCarty knew that.

At the end of the game, the Trojans draped Joe’s jersey over the trophy for the team picture while making the No. 10 with their fingers. He had been there always.

McCarty sticks with you. He was overwhelmed. But there was more. How about Landon Gardella? The rugged catcher is a unique figure, a crusty down and dirty guy with the mitt and a pair of neat purple and gold argyle socks. With an impressive bushy beard thick enough to hide a car in he kind of reminds you of the House of David barnstorming baseball team of the first half of the 20th century with their chin-filled growth.

This was Gardella’s final game. The 32-year-old veteran had let it be known earlier in the year that he was moving to Orwell, Vermont. He likes the winter and the woods, no surprise with the mountain man look. It is his place. But after 15 years it isn’t easy to say good-bye to the game and the guys.

“It’s been a long-time coming, I’ve been talking about moving for a couple of years,” said Gardella. “I’ll never forget this. These guys are my family. I’m happier to leave with a championship.”

There is a beginning in Gardella’s future. He looks forward to it. But this was an ending albeit on the grandest of notes. Still, there was a forlorn sense here. Bittersweet.

On the field, Tri-Town got some big-time grit from rubber-armed Miles Scribner. Staked to an 8-0 lead, he was outstanding for four innings and then stumbled in the fifth inning. A couple of walks, a couple of wild pitches, throw in an error and a couple of hits and suddenly it was, 8-4. There was another for the Black Sox in the fifth and it was 8-5 and you could touch the momentum shift it was that prevalent.

Terryville is the best hitting team in the league and the door was open. But Scribner carried on. He stranded two runners in that sixth inning and a runner each in the seventh and eighth.  For Scribbie and his teammates it was no big deal. He talked about getting grip on the ball because his hand was sweating and then just went about his business.  Maybe Coleby Bunnell said it best for the team when asked if he was nervous – “I trust Scrib, I’ve known him forever and don’t worry about him.” There was also absolutely nobody warming up. There may not have been anybody left but it was his game, and he knew it.

There was no shortage of grit on Terryville’s side. Down 8-0, they stormed back, and they did it without two of their best players and two of the league‘s best in Adam Hinckley and two-time league MVP Tony Patane who had prior commitments. The Black Sox would not go meekly into the winter.

Good stuff but here’s where the ugly part of the night comes in. Down 8-5 in the seventh inning with one out and runners on first and second base, Terryville’s Alex Rauso’s high chopper tipped off third baseman Austin Patenaude’s glove. Shortstop Mike Fabiaschi fielded the ball and ended up catching the runner, Billy Armstrong, in a rundown between home and third base throwing him out.

Terryville claimed there was interference when Patenaude touched Armstrong after the ball tipped off the glove.  The umpires did not agree, and rage prevailed. One Terryville player stormed the press box and pointed a finger at Tri-State Commissioner Ed Gadomski blaming him for the whole situation (playing in Waterbury, etc.).

Two Terryville players were ejected in the extended argument with the umpires.  Arguments happen. Taking a short walk to the press box and verbally attacking the Commissioner.  Never. Tempers flare, we get it. The press box stuff. Not.  It was a big moment an d there is no place for that.

“(Litchfield) deserved (the title),” said Alarcon. “Mile threw his guts out. We dug down and came back but you can’t spot any team six or eight runs especially one that plays like Tri-Town. Hats off to them. We can’t make excuses. I’m not happy with the way we lost but give them credit.”

A crowd of about 200 didn’t pay anything to get in but maybe they should have left a buck on the seats. It was worth it. A night for Joe, a sweet good-bye for Landon. Another memory from Scribbie. Some spice that needed to be toned down. Emotions for a lost friend. Some grit and really good baseball.

It was all there.

All in all, wildly entertaining.