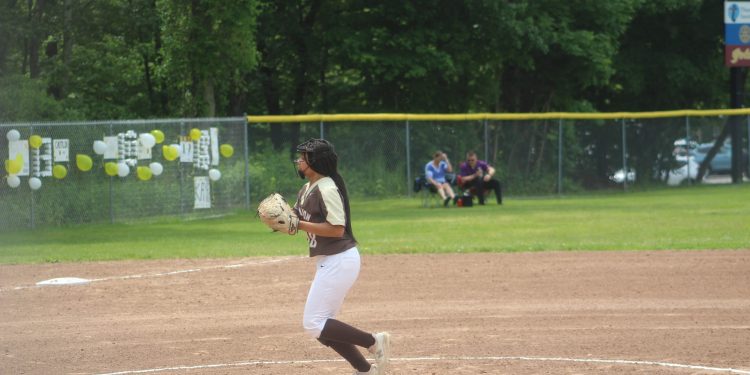 Thomaston softball gets by East Granby behind Johnson, key hits and defense

THOMASTON: When the ball left the bat, it looked like trouble.

It was the first batter in the opening inning of the Thomaston Golden Bears Second Round Class S game against East Granby and Crusaders junior Taylor Andrews had gotten a hold of the offering dealt by Bears junior Kaya Johnson.

As the ball came to rest near the left field fence, Andrews was thinking triple.

Fortunately for Johnson, a common theme throughout this game was about to take shape in the form of a perfect throw from left fielder Ava Harkness to shortstop Caitlin Magnuson who sent it perfectly to third basemen McKenzie Fairfax for the out.

A Golden Bears staple for oh so many years.

Name the sport, the Bears make the plays.

Thomaston would go on to take their tournament opener (they had a bye in Round One) by a 2-0 final with a pair of runs in the bottom of the sixth which Johnson made hold up.

The hard throwing righty struck out eight, allowed just one hit after the first inning double and did not walk a batter.

Johnson would set down 15 in a row after the Andrews hit and while her strike out pitches were working, she was also able to count on her defense to make plays around the field.

Hard liners to center or right?

No worries, Bears making the plays.

The Crusaders brought a big arm of their own in senior Emma Griffin who was going toe to toe with Johnson, striking out the side in the first after a leadoff single by Magnuson.

She would finish with eight K’s.

For their efforts, the Bears get to go on the road on Friday to face Coginchaug who dismantled Wheeler by a 12-0 final.

The home team tried to hustle out a run in their half of the fourth when Fairfax singled and was moving on the sacrifice by Johnson all the way to third but was hung up in a rundown and eventually called out on a close play at third.

Keeping the pressure on would pay off later in the game but it was up to Johnson to keep the visitors at bay, especially Andrews, who was dialed in all three of her at bats.

Johnson made some changes the next two times she faced Andrews and it paid off, according to head coach Kelly Finlay.

“We threw her some change up and pitches outside and it worked,” Finlay said. “It made me nervous that she hit it that far out in the first but we have been practicing relays and made the play.”

That Golden Bear hustle led to a break through in the bottom of the sixth when, with one out, Magnuson hit a slow roller to second that the Crusader fielder dropped before pulling her first basemen off the bag with the throw.

A wild pitched moved Magnuson to second and a sacrifice bunt by Hannah Loane put her on third with two outs.

Junior Kristin Foell came through with a big two out hit, a single that just stayed fair down the right field line.

Andrews might have gotten out of the jam with just the one run but that hustle we talk about reared it’s head when Fairfax lofted a fly ball into no-mans land in short center that bounced off the short stops glove.
Foell, running hard on the play with two outs, never stopped coming around third and while the throw beat her by a couple of steps, her slide allowed her to get in under the tag.

2-0 felt a whole lot better for Johnson and company who moved her team on to the next round with a spotless seventh.