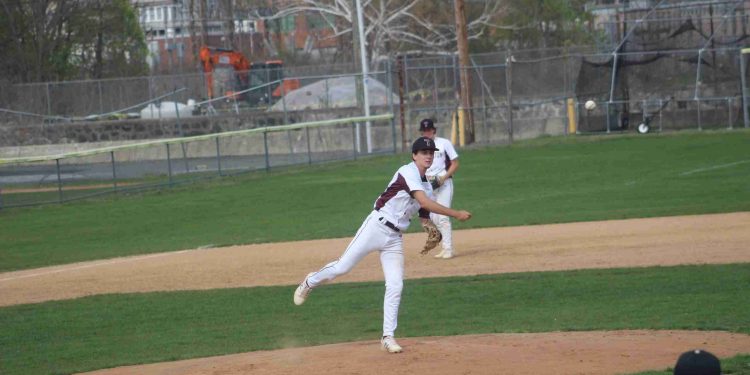 “Also, we have been hitting the ball and that certainly helps,” said the 11th-year mentor (he was an assistant coach for three years with the program and coached two seasons at Housatonic Valley Regional High School). “And, we have pitched well in key spots.”

Torrington won seven of its first 10 games, beating Seymour, Derby, Sacred Heart, Wolcott. Kennedy and Watertown by a combined score of 79-11 and beating Oxford, 7-5. The Raiders lost badly only once, a 28-9 thrashing at the hands of St. Paul, with their other two defeats coming to Naugatuck, 8-4, and Woodland, 3-0. Torrington was in both latter games but couldn’t push across enough runs to pull out the wins.

On the last day of April, the Raiders whipped up on Watertown, 9-1. Senior Ben Smith and sophomore Joe DiPippo combined for a one-hitter on the mound, while junior Cooper Suminski slammed a three-run triple in a Raider seven-run second inning on the way to 3-for-3 day.

According to Richardson, the Raiders also have great team chemistry. “They are very close as a team. They are willing to do whatever it takes for the good of the team and they continue to support each other on and off the field.”

As Richardson noted, THS has been torrid for the most part at the plate. Senior Cory Pray was hitting .591 (all stats are from the team’s first nine games) with 13 hits in 22 play appearances. He had four doubles, a triple and a homer, while scoring 11 runs and driving across another seven. Smith was hitting .474 with nine hits, including two homers and a double and driving in 11, while senior Nick Basso was hitting .450 with nine hits, including a homer with eight RBI and 13 runs scored.

Wait there are more hot bats to talk about. Senior Brian Duman was hitting .423 with 11 hits, including two doubles while scoring 15 runs, Suminski had a .391 batting average with a homer and nine RBI, junior Ray Campbell a .381 average with two doubles and five RBI, junior Jake Groebl a .323 average with a homer, eight RBI and eight runs scored, and junior Tyler Semonich was at .323 with 14 RBI and 10 runs scored. The Riders hit .386 as a team in their first nine games.

“This is one of the only years where I have not appointed captains since there are so many on the team that have displayed leadership,” said Richardson. “It is one of the best groups of seniors I have had the privilege to coach and a few juniors are showing leadership as well.”

Richardson said he found out a lot about just how good this team would be early on in the season when it beat Oxford, 7-5, and Wolcott, 13-3. “Those were great games for us. We showed resilience and toughness in both games. We limited big innings and we were aggressive at the plate.”

After last season was cancelled because of the COVID-19 pandemic, Richardson didn’t know quite what to expect when he tossed the balls and bats onto the field the first day of practice. “I really did not know what to expect given the situation with COVID and our lost season in 2020. It was difficult to gauge our own squad as well as the rest of the league.”

Now that he has a read on this year’s Raiders, he and his players are looking ahead to a great second half of the regular season and making a run in the Naugatuck Valley League and state tournaments.

“What we are looking to do right now is to make the important and necessary adjustments required to be a successful contender in the NVL at this time of the year. I think if we continue to execute and play hard, anything is possible.”

While there are several tough games coming up, Richardson said Woodland, which as unbeaten heading into May, seems to be the team to catch. “Woodland has not lost yet and several teams in the NVL have shown they are contenders.”

Games of import on the horizon include May 10 against Wolcott at home, a rematch and hopefully bit of payback against St. Paul on the road May 12, and a meeting with Naugatuck at home May 12.

There’s a lot of baseball left to play, but the Raiders believe they have the right ingredients to play their best baseball when it counts the most, down the stretch of the regular campaign and in the NVL and state tournaments.