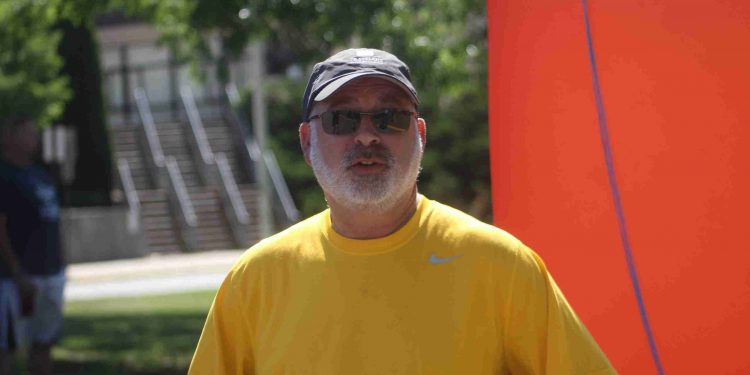 Paul O’Heron, secretary of the Torrington Varsity Alumni Club and director of the Raider 5K Run/Walk, was thrilled to see the turnout at the event held in early June at Torrington High School.

Some 130 participants turned out on a warm, late spring morning to take part in the run/walk, which raises money for the VAC. “We started the run to raise money for the club in 2012,” explained O’Heron. “We couldn’t do it last year and we don’t have the food and refreshments that we have had in the past because of COVID-19 protocols. But it was great to see so many people show up. I think we actually had more out-of-towners running this year than Torrington people. The state’s road race calendar is pretty light, so I think people are looking for places to urn.”

O’Heron talked about where the money raised by the club, which has been around since 1945, goes. “The scholarships are the big thing that we do and I believe the club has raised around $300,000 over the years for that fund. In addition to this run, we also hold THS alumni day the day after Thanksgiving and also an invitational track meet at THS.” Both the alumni day and track and field event were also cancelled in 2020 because of COVID-19.

The legendary late Connie Donahue, longtime athletic director and coach at THS, started the Torrington Varsity Alumni Club in 1945, hoping to create an organized body of former THS varsity athletes, many of whom had just returned from World War II, to be active and contribute to the youth of Torrington.

Since its inception, the purpose of the organization has been as follows: To grant scholarships to deserving THS athletes that earn letters for participating in a varsity sport; to maintain a closer relationship between alumni and current THS athletic activities; to better athletics, athletic facilities and promote recreation in Torrington; to keep an organized body of alumni, male and female, who have earned a varsity letter for participating in a sport at THS and who are interested in aiding sports and recreation in Torrington.

“Thanks to the efforts of many dedicated individuals over the past 75 years, the VAC has been extremely successful in achieving their goals….and then some,” said current president, Mario Longobucco. “The VAC has sponsored and coached countless youth teams, ran very successful softball and basketball tournaments (including the Schoolboy Invitational of the 1970’s and early 1980’s) and organized and ran the Varsity Alumni Youth Basketball League for decades. The league began in the 1950’s with 28 players and eventually grew to over 600 participants.”

Longobucco, who has been associated with the VAC since 2009, said most people are aware of the club through its annual scholarships. “The first Varsity Alumni Scholarship was awarded in 1948 in the amount of $100. Since that time, nearly $300,000 has been awarded to graduating seniors that have participated in sports at THS.”

Longobucco, the girls varsity soccer coach at THS, got involved when he was approached by O’Heron, current treasurer of the club, Paul Denza, and others who were trying to revive the club. “People like Andy Pace, Frank Russo, Sonny Toce, Lou Zanderigo, and others were all of an age where they couldn’t grow the club or branch out into other community projects. The board at the time was ready to take that on and they asked me to join. I was already active in several fund-raising organizations or events so it was a natural transition. We’re all friends and we enjoy each other’s company and we are just trying to give back in some way and to try to make a difference; just like the guys that started it all back in the 1940’s and every decade since then.”

In addition to the annual scholarships, the VAC is creating a special projects fund, said Longobucco, “to benefit any number of things at THS or Torrington’s athletics in general”. One example is the track and field records board displayed at the stadium field and track complex at THS. “We are always open to ideas and if we can’t do it we help facilitate the desired project any way we can. We have recently expanded and are now awarding the Glen and Kathy Aeshliman Scholarship for soccer players at THS.”

In addition to the Raider 5K Run/Walk, the club’s major fundraisers are the Torrington Varsity Alumni Club Track Invitational, which brings in between 16 to 20 teams from around the state to compete at THS. On the day after Thanksgiving, the club holds an Alumni Day at THS. Participants bring dry or canned goods that are delivered to area food banks. Alumni games are held in boys and girls soccer, boys and girls basketball, and girls volleyball. The club hopes to expand on this fundraiser.

Christine Gamari, a former star athlete at THS who played Division I college volleyball at Holy Cross, was herself a VAC scholarship recipient in 2004. “I got involved because I believe in the rich history that the VAC has in giving back to the Torrington community and its student-athletes. I am very proud of the annual scholarships we offer for senior student-athletes. By being an active member of the club, I feel like I’m helping other students take steps to build their futures. I would love for all former Torrington athletes to return to Torrington some day as a coach, volunteer, or active community member. For me personally, I felt that I needed to give back to a community that had already given so much to me.”

Gamari said the VAC is looking for more members. “The club has a small, but mighty, force of volunteers. We would love to grow our membership so that we can have sub-committees dedicated to our various events, which will allow us to increase our outreach into the community as well. We definitely need younger members so that the VAC can continue its rich legacy for many years to come.”