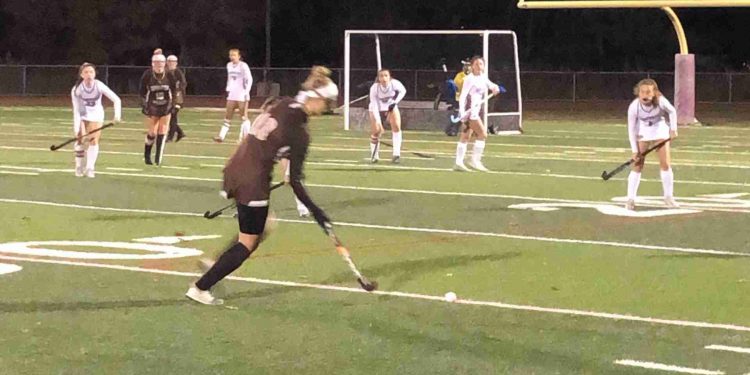 BRANFORD – On the green football carpet in the crisp atmosphere of

Branford High School, the Thomaston High field hockey team saw its dream of a state title die Tuesday night. But while painful, it was a noble ending.

The No. 3 Bears battled No. 2 Stonington toe-to-toe, Bear-to-Bear, before bowing on an early fourth quarter goal, 1-0 in a vigorous semifinal battle. While the Stonington Bears moved on to the Class S finals against North Branford Saturday, the Golden Bears finished their season with a 13-2-2 mark.

Little separated the two teams in an up and down game decided by one play early in the fourth quarter. Maddie Mendez dribbled down the right side and centered a pass to Alex Fidrych for the game’s only goal from the left side of the net with 14:24 to go in the game. The only difference but a big enough one to send one team into a championship final and one team home feeling empty.

“One lucky play,” said Thomaston senior Aurelia Barker. “They came out hard with something in mind and executed it. They are a tough team. It sucks that one good play can decided a game. We didn’t want it to end here especially after having no tournament last year due to Covid-19. We wanted it so bad. So bad.”

Senior Emma Sanson echoed her teammates’ thoughts. “It’s heartbreaking,” said Sanson. “We got (the tournament) put off last year and we wanted it so bad. I love this team so much.”

Prior to the goal, hints of overtime were not far away.  Neither Bear had shown any signs of backing up. At the end of the first half there were no shots, no saves and no corner hits for either team. Just good, solid play, back and forth in the middle of the field. Stonington finally put a statistic on the board with the first shot of the game 13 minutes into the third quarter and managed two penalty corners.

By game’s end, Stonington outshot the Bears, 2-0, and finished with five penalty corners to none for the Bears . It was defense at its best.

“We have some outstanding defensive players led by Anne Drago and it is very hard to dribble or pass through them,” said Stonington coach Jenna Tucchio. “We only gave up eight goals during the regular season and I think only 14 shots.”

All of which stifled Thomaston’s style of offense.

“We usually are able to dribble through every defense but they were so aggressive and so fast that we couldn’t and it was the same thing with the pass,” said Barker who led the Bears with 20 goals this season.

Thomaston had its moments particularly in the first and third quarters where they pressured Stonington in their end but no shot could be found.

“Their corner backs had exceptionally good stick skills and we couldn’t get through them,” said Thomaston coach Jon Long. “It was almost impossible to get through.”

Meanwhile, Stonington found the one open it would need.

“Madison Mendez brought it down. I was at the top of the goal, got my stick down and was on my toes. Maggie centered it and I deflected it in. It was amazing,” said Fidrych.

From that point on, all Tucchio saw was the clock. “I hadn’t seen Thomaston play but I knew the last time they were here (2015) they went on to win it,” said Tucchio. “I knew this was going to be a battle to the end and my only though was for us to run out the clock.”

Long knew his Bears had left what they had on the field.

“My kids played out of their minds,” Long said. “This was a clean game, a hard fought game by both teams. Stonington deserved it.”