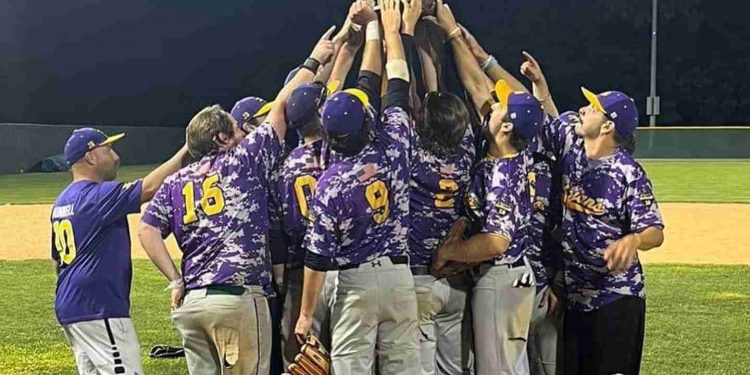 WATERBURY – Dan McCarty delivered. Matt Troy delivered. Connor Gannon delivered. And that was a few from the winning side. On the other side disappointed but not bowed in defeat, Jason Johnson delivered, Keegan Daigle delivered and Jon Wilson delivered.

In the end, The Tri-State League delivered.

Tri-Town nipped Bethlehem, 4-3, Monday night in a 10-inning drama-drenched beauty to sweep the best-of-three Tri-State League championship series at a rapidly chilling Municipal Stadium, two games to none.  The Trojans have now won back-to-back crowns having defeated Terryville a year ago and have won three of the last four titles.

The championship series always gives you a game; it doesn’t always give you a show. This time around a three-hour prime-time special emerged chafing the back of the legs from sitting on the edge of the seat and making the several hundred fans yearning for a bucket to show a little monetary appreciation on a night where all that was required was a little time.

Tri-Town and Bethlehem offered up some delicious contrasts. The Trojans are the veterans, a sweet combination of ben-around-for a while and haven’t been around long while bathed in titles (three in four years) and title series (nine in 12 years). It’s almost blasphemous not to see the pink camo shirts at title time.

The Plowboys, their program rich in history, are the new kids on the block. A bunch of early 20-somethings loaded with grit, ready to rock, roll and member. They had handed Tri-Town its only loss during the season and hunger for what Tri-Town has.

Tri-Town unloaded in Game One, 10-2. Bethlehem refused to go quietly into the summer. Being there wasn’t going to be a soothing salve and the Plow refused to play the token opposition role.  So what we got was a whole lot of fun.

As the Plowboys’ Jon Wilson said after the game – “You won’t see a better baseball game in Connecticut this summer. “

Bethlehem made the Trojans take the title as it should be. Tri-Town accepted the challenge and delivered.

Start with the Trojans manager Dan McCarty. He had rough night at the plate. Well, up to the 10th inning anyway.  With runners on first and second in the fourth inning and his team trailing, 1-0, McCarty grounded into a double play. One inning later and the score the same, McCarty grounded to the pitcher with a runner on second.

In the eighth inning after the two teams had evened out, 3-3, McCarty stepped the plate with runners on second and third and one out and struck out.

All was forgotten in the 10th inning. Willy Yahn singled and stole second with one out bringing up McCarty. This time he grounded a high hopper over the first baseman’s head for an RBI single which proved to be the game-winner.

“Willy did his job leading off and I said to myself that I can’t go 0-for-5 in a championship game,” said McCarty. “I said hammer it down. I wasn’t scared with two strikes and slammed it into the ground.”

That’s all anyone will and has to remember. McCarty delivered.

But he was just one of many. A little earlier in the seventh inning Matt Troy arrived at the plate with the bases loaded and two outs and the Trojans desperately trying to introduce a runner to home plate. He rifled a rocket off Keegan Daigle into the left center gap for a three-run triple turning a one-run deficit into a 3-1 lead.

He wasn’t quite done. In the 10th inning he turned to the glove. Wilson had led off with a double and moved to third on a ground out with Tri-Town clinging to a 4-3 lead. Against a drawn-in infield Rick Descoteaux lasered what looked to be the game-tying hit only to see Troy field the ball on one-hop and throw a strike to home to get a sliding Wilson.

Big-time with the bat and glove. Matt Troy delivered.

Connor Cannon came on in relief of Bobby Chatfield in the eighth inning with the score tied, 3-3. In the 10th, Bethlehem made him put up. After Wilson was out at home, Gannon plunked Joe Fainer with a pitch. His response with the game on the line? He ended the game as Matt Mancini grounded to shortstop.

“Connor has been a workhorse for us all year,” said McCarty. “Matt Troy has been on the ball all playoffs. We don’t win without either one of them. “

The Plowboys came up a run short not because they didn’t have their own deliverymen. Jason Johnson, just off a superb freshman season at St. Joseph’s College in Maine, pitched four innings of two-hit, shutout ball to start the game.

Daigle came in for Johnson to start the fifth and stranded a runner on second base in the sixth. After giving up Troy’s big hit in the seventh inning, he left the bases loaded in the eighth inning with a pair of strikeouts.

Then there was Wilson. Three hits, 6-for 9 in the series. He drove in the tying run in the bottom of the seventh inning. He led off the 10th with a double. He gave the Plowboys a chance.

McCarty also had high praise for Bethlehem – “They played their…s off. “Rick (Coach Revere) has put a great team together.”

Deep into the night you might have found some Plowboys and Trojans in the Municipal Stadium parking lot, sharing a pretty cool night.  Winning never gets old but either does an admirable battle.

Willy Yahn, just several months away from being released by the Baltimore Orioles, had a blast. This wasn’t professional baseball, but maybe it was better.

“It feels so good,” said Yahn.” I’ve had fun every single time I’ve played. Playing next to Fabs (Mike Fabiaschi) is a blast. And it’s great to show people who we are.”

Fabiaschi, a former Oakland A’s farmhand, stopped playing for five years and then returned last season He’s two-for two for titles and was on base six times in eight at-bats during the series. This is special.

“I thought I was done,” he said. “I played a lot of golf and I now have two boys, Gino, 4, and Luca 1. They were there for the first game and we celebrated dad’s birthday. This is all pretty special.”

Teams and players delivered. But best of all was that the night delivered.

It was all pretty special.