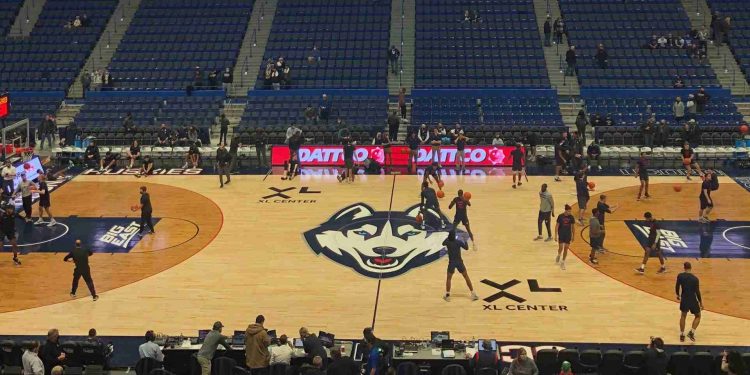 UConn at a crossroads after ugly home loss to St. John’s

HARTFORD – Dan Hurley took a second to think whether he should go on what he called “a rant.”

The UConn coach then decided that the time, about a half-hour after an ugly, 85-74 loss to St. John’s at an aggravated XL Center, was right.

“There’s a lot more going on with these guys and I think the hard thing is, if the season is not going exactly the way a player would want at this point of the year and they may know there’s outs in a couple of months (the transfer portal), sometimes they give in a little bit,” Hurley said. “I think that all programs are dealing with that. I think that’s why you see some of these performances that are uncharacteristic of teams that look great early on. So, I do think that players in general are not staying in the fight, trying to find a way to help.

“I see it. I see the look of that, I’ve seen it the last two years. It’s not necessarily an issue with your starters or your top options on offense. You could see a lack of people sticking with it, trying to fight and help a team.”

Under the old NCAA rules, if a player transferred to a new school, they would need to sit out a year before becoming eligible again. Now, they can enter the transfer portal and be eligible the next season. It’s the NCAA’s version of free agency. And could you blame a player for starting to think of their next step if a situation is not working out for them? It’s a fine line for coaches to walk on, a line that is clearly bothering Hurley.

This loss, UConn’s fourth in its last five games, should have been worse as the unranked Red Storm missed 17 free throws and 11 of their 13 three-point attempts. It was a defeat that brings reflection and questions. Hurley is looking for answers.

“Their program was obviously a lot tougher than our program was today,” said Hurley, whose team is now 15-4 and 4-4 in the Big East. “I didn’t see this coming. I thought we’d play a lot better. We just looked weak and unprepared. Disappointing just begins to describe it.”

In the first half, UConn freshman center Donovan Clingan corralled a defensive rebound and inadvertently hit David Jones with an elbow in the head. On their way down the court, Jones caught up with Clingan and threw an elbow of his own, drawing the ire of the sold-out Hartford crowd. After a lengthy review, both players were given flagrant fouls.

“If they wanted to play like that, we were going to come out harder,” said St. John’s center Joel Soriano, who had his way with the UConn frontline, finishing with 19 points and 13 rebounds. “We played hard and fed off that energy. I think it was good for us.”

The Red Storm ran UConn off the floor in the second half after the teams went to their locker rooms tied at 38. Paced by a balanced attacked, they went 16-for-22 on two-point attempts, regularly beating UConn’s guards on penetration. AJ Storr and long-time UConn nemesis Posh Alexander had 14 points apiece, while Rafael Pinzon came off the bench and was very effective with 12 points.

“The start of the second half, that’s the killer,” Hurley said. “That’s really what took away any chance for us to keep the crowd in, keep the confidence.”

Jordan Hawkins scored a career-high 31 points for the Huskies, including their first 11 of the game. However, that effort was marred by seven turnovers. Alex Karaban had a solid game with 16 points.

“Give credit to St. John’s, they came out here and just bullied us the whole game,” Karaban said. “We have to look in the mirror as a team and take a deep dive into why we aren’t as collected or as cohesive as we were in the beginning of the season.”

Adama Sanogo had 14 points and 10 rebounds. No other Husky scored more than six points. Sanogo, though, has his day came to an early end as he was ejected for jarring with players on the Red Storm in the final minute. It was a fitting end to an overall poor performance for UConn.

The Huskies go back on the road to face Seton Hall in Newark Wednesday night. The team will be there, but will they all “be there”? That is the burning question currently hovering over the program.