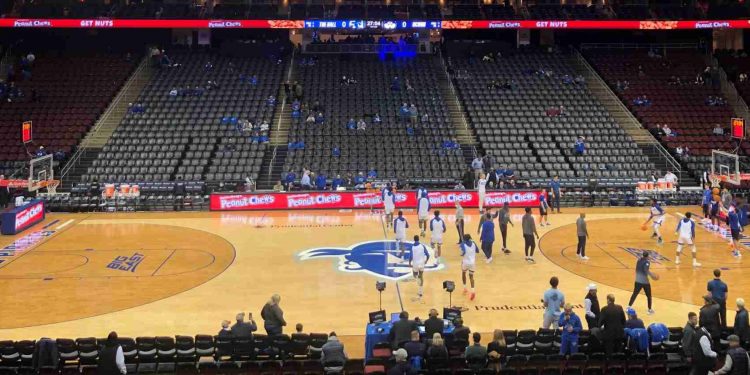 NEWARK – Three weeks ago to this day, UConn stood at 14-0, and was just about on top of college basketball with its No. 2 ranking.

Since then, the Huskies have accumulated enough losses, and bad ones at that, where you can have a heated debate on ranking which one is the worst.

Their 67-66 defeat to Seton Hall on Wednesday at the Prudential Center may hold the No. 1 seed as the most painful, ugly, and bewildering one yet. This came right after Sunday’s horrid loss at home against St. John’s.

The scene: Having the lead for over 39 minutes, UConn, without head coach Dan Hurley and associate head coach Kimani Young due to COVID protocol, needed one stop to escape New Jersey with a much-needed win.

The Pirates inbounded with 15 seconds left and ran a motion play. The ball found Femi Odukale, who was open behind the three-point line at the elbow as only four seconds remained. Alex Karaban, however, quickly closed and forced Odukale to miss badly short.

The ensuing moment will stick with the Huskies (15-5, 4-5 Big East) and their fan base for a while. After the shot barely grazed the rim, the ball somehow eluded four Huskies in the paint and ended in the hands of KC Ndefo.

Ndefo’s putback was good and plus he was fouled with 1.6 seconds left. He missed the free throw and then the clock ran out on the rebound attempt. The crowd of 9,710 went crazy and some attempted to storm the court, but they were physically pushed back into the stands by security.

Where does this loss rank?

“This is the toughest one,” said UConn guard Tristen Newton, who made two free throws with 1:06 left to give the Huskies a one-point lead. “I feel like we should have won with the way that we fought. One more rebound and we would’ve won the game.

UConn assistant coach Luke Murray, handling the head coaching duties in place of Hurley, said a miscommunication played a part in the botching of the final play. Newton, Andre Jackson, Adama Sanogo and Jordan Hawkins were all in the paint.

“We were trying to switch through the ball screen,” Murray said. “I think there was a little miscommunication between Adama and Andre. I think because of the scramble situation with the close-out, we weren’t able to get a clean body on (Ndefo). Andre tried to get a piece of him, but it wasn’t able to.”

The Huskies have now lost five out of six. In the first half, though, they looked like the team that was ranked second in the nation, which makes this loss even harder to comprehend. They jumped out to a 17-point advantage, ultimately taking a 40-26 lead into the locker room. UConn shot a blistering 7-of-15 from three, as Sanogo had 10 of his 16 points at the half, while Hawkins recorded nine of his 13 and Karaban all of his nine. Notice a trend?

Over the second half, the Huskies developed no rhythm, shooting only 29 percent (7-for-24) and made no field goals over the final 6:50, including a crucial miss by Sanogo on wide-open lay-up with 1:35 remaining.

Kadary Richmond followed with a jumper to give the Pirates (12-8, 4-4) their first lead of the night. Failure to make lay-ups, rebound execution, not following their shots on misses, you name it. The second half was a fitting sequel to their St. John’s defeat.

“I thought I did a poor job in the second half of coaching the guys, offensively in particular,” Murray said. “We talked at halftime, we knew Seton Hall was going to pick up their pressure in the second half and they did. We didn’t do a good job of handling it. They had us running our offense much further from the basket than we wanted to. And we missed some opportunities around the rim. I’ve got to do a better job of putting these guys in position to score.”

“In the second half, they jumped us,” Hawkins said.

After the St. John’s game, Hurley said potential changes were coming, but with the quick turnaround and the illness on the staff, UConn ran out its regular rotation for the most part. One possible move is more playing time for Donovan Clingan. The freshman center had seven points, six rebounds and two blocks in only 11 minutes and the Huskies outscored Seton Hall by nine points in that time, by far the highest on the team in the plus/minus category.

It was an unexpected and wild ride for the UConn coaching staff once finding out Hurley and Young tested positive.

“It’s been a whirlwind,” Murray said. “From practice to traveling down here and watching film with the guys, then we came over this morning for shootaround. I thought the guys handled an unnatural situation really, really well.”

UConn dropped to No. 15 in the rankings this week. A loss to Butler on Sunday and it may fall out altogether.

“We’re not going to hang our heads low,” Hawkins said. “We have a game on Sunday and we’re going to have to battle to win it.”

If they don’t, this once promising season could be on the brink of disaster.