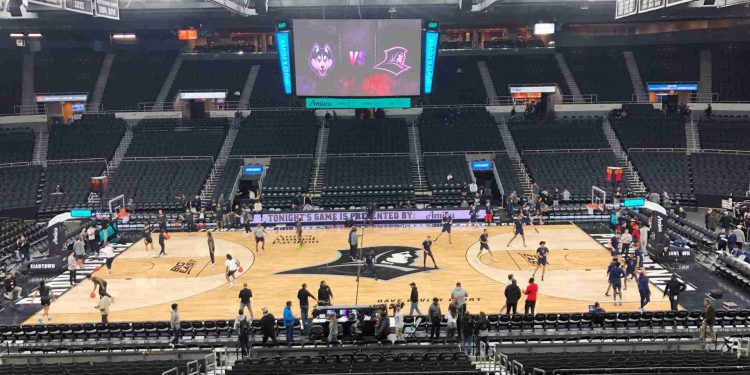 Losing road games to No. 22 Xavier and a strong Friars team on the brink of the Top 25 is hardly an embarrassing feat, however, the way it went down against Providence was troubling for the fourth-ranked (not for long) Huskies. They were seemingly beat to every loose ball in the second half and, simply, couldn’t stop fouling.

“It’s an embarrassing loss,” Hurley said. “We pride ourselves on a culture. We generally lose one possession games when we lose and this is back-to-back games where we really caved in, so we’ve got a lot of work to do before we play a red-hot Creighton team on Saturday.”

The Huskies had a 20-15 lead in the first half, which ultimately would be their biggest advantage of the night. With Andre Jackson sitting the last 16 minutes of the half with two fouls, UConn struggled to get in any rhythm offensively. The break seemed to hurt Jackson, too, as he finished with only three points on 1-of-7 shooting. Hurley wanted to bring him back earlier, but felt his hands were tied.

“Andre, he put himself in that position,” Hurley said. “He was just overly hyped up on his second foul, a foul you can’t commit and take yourself out of the first half. I couldn’t play him because he’s such an aggressive player and I had no choice but to sit him. It’s really hard to sit (16) minutes in the first half and then try to find a rhythm. If we don’t get more than that from Andre, we’re going to struggle.”

Providence, which also received 17 points from Noah Locke and a double-double from Ed Croswell (13 points, 13 rebounds), was in full control in the second half, as UConn could never get the big stop whenever it cut the lead down to the five or six point range. The Huskies committed 27 fouls, a theme carried over from Saturday’s loss.

When asked about the foul discrepancy over the past two games, Hurley paused five seconds and said, “Listen, I’m not going to talk about the free throws and fouls. I don’t want to get into that.”

He was more than willing to speak about his team losing the effort battle.

“It felt like we got beat to every loose ball, every 50-50 ball,” said Hurley, whose team surrendered 14 offensive rebounds. “In the second half, they were just a lot tougher than we were.”

Trying to find something that could work, Hurley went to a rare double-center combo, playing Adama Sanogo and Donovan Clingan at the same time for stretches. Sanogo had a quiet night with 11 points and seven rebounds. Clingan, meanwhile, was UConn’s best player along with Alex Karaban (11 points, 3 three-pointers), according to Hurley. The freshman from Bristol scored 12 points, grabbed 11 rebounds and blocked four shots in only 20 minutes of play.

“I wanted to get Donovan on the court,” Hurley said. “Donovan was great today. Him and Alex were our two best players. We’ve got to get Donovan’s minutes up some way.”

Clingan deflected the attention from his play to his disappointment with the loss.

“I really don’t care about my stats, I just care that we lost,” Clingan said. “I wish I could’ve done more. It didn’t go our way tonight and we’ll be back.”

“Conference play is a lot different than non-conference play,” added Hurley. “In these games, there’s a tightness you have to have to your game. There’s a tension in these games that these guys have to adjust quickly to.”

While Hurley struggled to find players on his roster to praise, he had no trouble raving about Hopkins.

“He’s an NBA player,” Hurley said. “We were scared when we were watching film and knew he’d be a tough matchup for Alex. He was the best player on the court today and I don’t think it was really close.”

UConn has another tough battle ahead when Creighton, winners of three straight, visits Gampel Pavilion on Saturday. Another loss and the 14-0 start for the Huskies will be a distant memory.