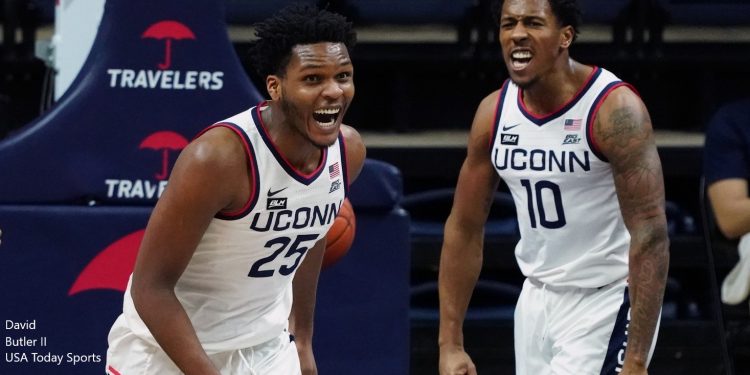 STORRS – From Josh Carlton’s aggression in the paint to Tyrese Martin’s best game in his young UConn career to James Bouknight’s slam dunk competition-worthy windmill, the Huskies emphatically erased the memory of their overtime loss to Creighton 10 days earlier.

The 82-61 blowout over DePaul, at a near-silent Gampel Pavilion, was UConn’s first Big East win since March of 2013 against Providence. More importantly, at this time, was the Huskies’ smothering defense, which held DePaul to 38 percent shooting (4-of-17 on threes), while forcing 18 turnovers. They held DePaul three-guard lineup of Javon Freeman-Liberty, Ray Salnave and Charlie Moore (Big East preseason first team selection) to 19 points on 9-of-25 from the field.

“My teams, and how I build programs, is at the defensive end of the floor,” said Hurley, whose team’s physicality led to a 43-33 domination of the boards. “If you defend the hell out of people, and make people uncomfortable, and you turn them over, you’re going to speed people up and take away the three-point line. If you’re a high-level defensive team, it’s going to give you a chance to win every single night you step on the floor.”

In the loss to Creighton, Bouknight exploded for 40 points, but had little offensive support around him. Martin provided the necessary boost the Huskies needed on Wednesday with 22 points, two shy of his career he registered at Rhode Island last season. For the third time this season, he recorded exactly 10 rebounds and threw in three assists, as well.

“Their defense was aggressive and physical enough to take us out of our rhythm,” former UConn assistant and DePaul head coach Dave Leitao said. “And my fear was that James would be a problem for us with his offense, and if you spend too much time on him, then the other guys open up. Martin was a guy that really capitalized on some freedom of movement.”

Martin, who was recruited to Rhode Island by Hurley, has started the last three games, and for the first time, became a threat offensively. He knew the DePaul defense would place a major emphasis on Bouknight.

“After he scored 40 points, (we thought) the next team that came here would leave us open and try to load up on James and that’s kind of what happened,” said Martin, who made nine of his 15 shots, including two-of-three on threes. “Me and my teammates made plays.”

“He’s obviously really physical, has great physical stature, is super athletic and has a toughness about him,” Hurley said. “He’s a streaky shooter. Because of everything we missed in the summer, the preseason, the secret scrimmages, and the exhibitions and all the non-conference games, we’re learning on the fly on how to use him.

“That’s one of the downsides of this covid thing. You’re learning about your team in Game 2 of conference play and it’s just been a lot of evolving and adapting.”

Bouknight finished with 20 points and was a team-best plus-21. For good measure, he executed a spectacular windmill dunk on a fast break in the second half, meeting his nightly quota of thrilling the highlight shows and social media.

Carlton, in and out of the lineup throughout the first four games, came off the bench and had 11 points and 10 rebounds. In one sequence in the first half, he aggressively fought for a loose ball, which led to some words between the teams. The UConn bench jumped up and started screaming with passion, a moment that seemed to galvanize the team.

“Josh is being pushed right now in having to earn minutes,” Hurley said. “Adama (Sanogo) had a better week of practice than Josh. Adama earned the start, but was lost out there like most freshman are during this covid thing because of everything he has missed. Josh got an early opportunity and he has a high level of urgency.”

It’s hard to call the fifth game of a season a “must-win”, but with a three-game road trip on the horizon, it was crucial for UConn (4-1) to secure this home contest. The Huskies have not played a road game yet this season, with their only trip outside of Storrs coming on Dec. 3 at Mohegan Sun in a win over USC. After traveling to Marquette, Butler, and DePaul, No. 4 Villanova will be waiting for them at Gampel.

Life in the Big East rarely has any easy moments. That’s what made Wednesday’s win so satisfying, entertaining and, ultimately, necessary.