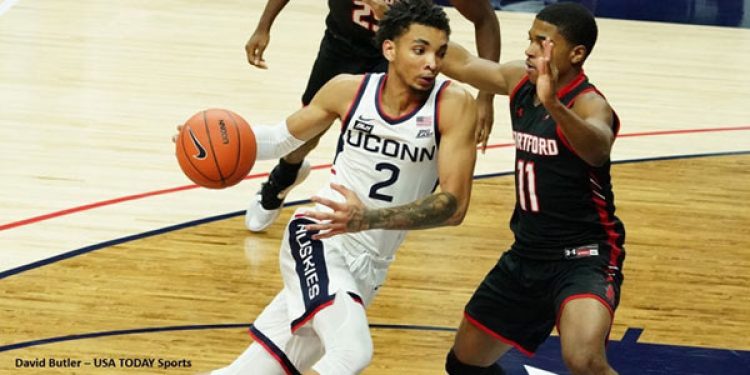 STORRS – There are times when it’s easy to forget this “new” world exists. One of them was certainly the gridlock traffic caused by an accident in West Hartford on I-84 Saturday night. Been there, been stuck in that far too many times over the years.

But then there are other times when this new reality hits you out of nowhere. That occurred on my ride into the UConn campus for the first time since March 5th. Usually, there are people and cars everywhere, especially on nights the Huskies play, and you can feel the anticipation of the game the second you arrive.

It is not hyperbole when I say there were no cars or people around. I saw, literally, no one driving in. It was jarring, sad, and gut-wrenching to witness. This was the year UConn fans have craved for a very long time. The school is back in the Big East and Dan Hurley, in his third year, seemingly has the program on the path for great things. Season ticket sales had significantly risen. The end of the Kevin Ollie era finally feels distant. March 5th may be only be eight months ago, but it truly feels like eight years, especially in this context.

On that day in March, the Huskies beat Houston in front of raucous sold out crowd with the team jumping on top of Christian Vital to celebrate his last game at UConn in a World Series-like celebration. The team and their fan base felt primed for a big postseason run. Now, with fans barred from the arena for who knows how long, it’s up to the Huskies to create their own energy.

Two games in, UConn has done a decent job of that. The Huskies held off Hartford on Saturday, 69-57, to improve to 2-0, despite extremely minimal practice due to a two-week Covid shutdown. By my (very) unofficial count, there were a total of 161 people in the building, including the teams, training staffs, officials, media, security, and family members of the players and coaches. The experience, simply, is odd.

UConn’s game operations crew still turned off the lights for the starting lineup introductions. There was crowd noise piped in during the game, albeit low. Half of the stands in the lower deck were folded up and the team benches are staggered into three rows. On a number of occasions, Hartford coach John Gallagher got the players on his bench to provide its own crowd noise by enthusiastically standing up and clapping. And the Huskies left the court after their win to a polite applause from the family members on hand.

Despite all of the weirdness, something is better than nothing. With sporting events getting postponed and cancelled on a regular basis, just playing can be considered a victory. Hurley, though, was clearly annoyed on Wednesday that his team barely had time to practice after it got shutdown for two weeks due to a positive test within the program. Unfortunately, that is life right now.

The Huskies don’t even have a full schedule. They are tentatively set to play two or three games in the Mohegan Sun bubble (Hurley said an official decision will be made by Sunday) before returning home for their Big East opener against St. John’s on Dec. 11th. They have four other league games scheduled through Dec. 23rd, and then their calendar simply says, “remainder of the schedule to be announced.” Crazy times, indeed.

And with these times, teams will have to adjust accordingly on and off the court. In the opener against Central Connecticut, Hurley was furious with his team’s defense. Statistically, it improved against Hartford, as the Hawks shot only 32 percent, including a woeful 4-of-15 on threes. But the Huskies had issues keeping Hartford in front of them, committing 24 fouls that led to 21 made free throws by the Hawks. Hurley used the word immaturity over and over to describe their less-than-stellar approach.

“All of them were fouls,” Hurley said. “I obviously complained a lot because I was frustrated by our immaturity. In a game like this to be minus-13 at the foul line is a surprising number and that was our immaturity.

“Just immature and really dumb fouls. We weren’t in a stance, just sloppy and immature.”

UConn jumped out to a 19-point lead, but lost its way offensively, notably in a six-minute stretch without a field goal to start the second half. Hartford, led by Moses Flowers with 24 points, creeped back to within three before the Huskies were able to close the doo

James Bouknight, an All-American candidate after a stirring finish to his freshman season, personified this game for UConn, scoring 16 points in the first half, and doing it in any way he chose with a dunk, two three-pointers, and multiple lay-ups. Over the final 20 minutes, however, he only took three shots, making one, and finished with 18 points.

“In that first half, he looked dynamic,” Hurley said. “If he wants to be that guy this year, that full game focus and maturity has got to be there. To end that game with 18 and to have the defensive issues he had, we’re not going to get to where we need to. He wants the burden, and he can handle the burden. He’s just got to improve his focus and his intensity.”

Without Isaiah Whaley (10 points, 10 rebounds, five blocks, and four assists) and Jalen Gaffney (15 points, team-best +13), Hartford may have pulled off the upset.

Instead, the Huskies, as mentioned, are 2-0 with a possible trip to Mohegan Sun on the horizon. Hurley said it depends on how his team feels physically Sunday on whether they commit to play or not. Seeing how everything has gone in the sports world, every team and every game is classified under the dreaded “day-to-day” status.

Still, that is better than the alternative: nothing.