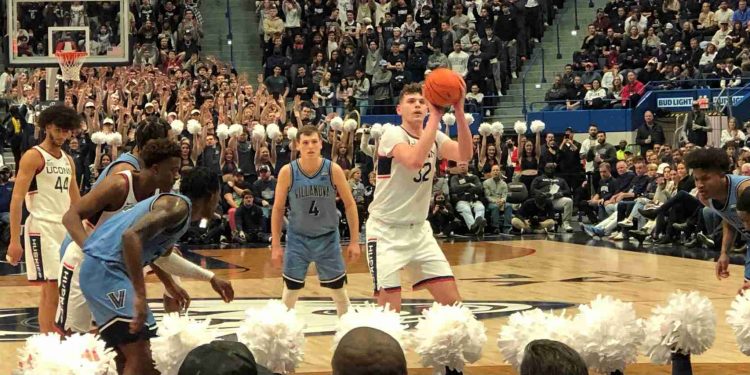 HARTFORD – In the seasons leading up to Dan Hurley’s arrival at UConn, tickets for weeknight games at the XL Center were, to be kind, cheap and easy to get a hold of.

Fast forward to Hurley’s fifth season at the school. On Wednesday night, which saw the No. 2 Huskies scratch and claw their way past Villanova, 74-66, there was no event in higher demand in the Northeast – college or pros. The get-in price on the secondary market was well over $100 dollars, with fans paying those prices for some of the worst seats in any sporting venue. The bars and restaurants were packed with lines going into the sidewalks. Parking around the arena filled up – quickly.

To showcase the demand and attention this team has developed, UConn Athletic Director David Benedict went on a re-Tweeting spree about an hour after the game, posting pictures of the scene in the neighborhood and the rowdiness inside the seemingly ageless venue.

Hurley, and who can blame him, took a moment at the start of his postgame press conference to reflect. That is, after he arrived later than usual to the press room.

“Sorry for the delay, there’s more people in the locker room these days after games than in the early years,” said Hurley, whose team improved to 14-0. “Unbelievable crowd, obviously, this place was electric. It was cool on the walk over from the hotel, I walked over at about 5:15, to see all of the UConn fans in the restaurants, in the windows, probably having a couple of cocktails. Just the city buzzing hours before the game was pretty neat and this venue played a huge factor in us being able to get a tough Big East win.”

The scene, the attention, and the demand on Wednesday was exactly what Hurley envisioned when he accepted the job offer from Benedict.

“I loved the last place I coached at (Rhode Island),” Hurley said. “I only would’ve left that place to go to a place where you could get to this level of college basketball, to have games where it’s a hot ticket and you could play in some of the biggest games of the day in college basketball. And we (now) have a team that could go real far.”

This win lacked style points and didn’t have the intense drama that last season’s battle between these teams in Hartford had, a UConn win that led to its fans storming the court. However, it showed how UConn’s defense and depth are going to play a major role in the Huskies’ future.

Adama Sanogo was mired in foul trouble throughout, with his second foul in the first half setting off a rage in the crowd and on the UConn bench after little contact was made. Jordan Hawkins made up for Sanogo’s absence, scoring 16 of UConn’s 33 points in the first 20 minutes.

After Sanogo picked up his third foul in the second half, Donovan Clingan came in and provided two huge baskets, blocked a shot, altered another, and added two free throws. It was at that point, as well, when Hurley employed full court ball pressure. Enter Hassan Diarra, who came off the bench and swiped four steals. Diarra and Andre Jackson (10 points, six rebounds, three steals, one block) swarmed Villanova’s guards, leading to 11 Wildcat turnovers in the second half.

“My mentality was to be disruptive and to pick my team up with energy,” Diarra said.

With UConn holding onto a two-point lead with 3:06 left, Jackson forced a jump ball, with UConn gaining possession. Sanogo then let out his night of frustration, barreling through the Villanova frontline for a lay-up and a four-point advantage. Jackson then added a three with 2:15 remaining following yet another Villanova turnover. Ballgame.

“The competition we have played coming into this game helped us prepare for this,” said Alex Karaban, who had 15 points and six rebounds. “How coach puts us through practices, they are hard, they are grueling, and they can be even harder than the games. The preparation we have going into these big-time games really helped us out tonight.”

“They got into us with their pressure defense,” noted Villanova coach Kyle Neptune, whose team was led by Caleb Daniels’ 23 points, followed by Eric Dixon with 18. “UConn’s a really good team and is well coached. There’s no team in our league where you can say there’s only one guy and if you take him away, you’re guaranteed to have a positive result. They are a good team for a reason.”

Hawkins finished with 22 points for UConn, which visits Xavier on Saturday. Another big game and another day in the spotlight. Hurley, Benedict and the Huskies wouldn’t have it any other way.