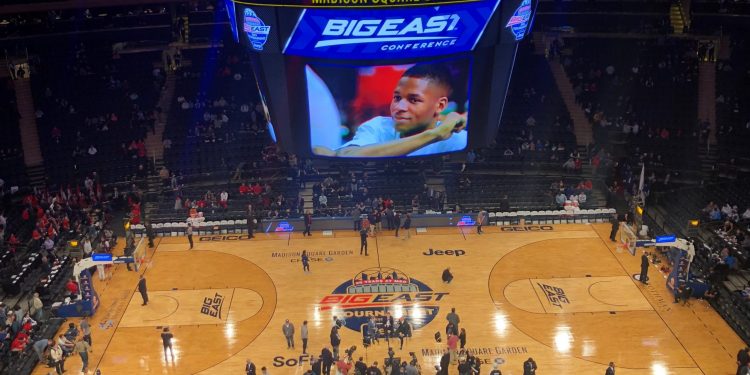 UConn knocked out of Big East Tourney by Nova

NEW YORK – It was fitting the third round of UConn-Villanova would come down to the last second.

When the Huskies look back at the final chapter, though, they will come to regret the numerous opportunities they whiffed on.

On the backs of Jermain Samuels (21 points and 12 rebounds) and Brandon Slater (15 points), the Wildcats held on for a 63-60 win in the semifinals of the Big East Tournament at a raucous Madison Square Garden. Barring a rare fourth meeting in the NCAA Tournament, Villanova wins the season series, 2-1, and will face Creighton in the tourney title game Saturday night.

For UConn (23-9), it was a frustrating loss, but one it will have to get over quickly with Selection Sunday on the horizon tomorrow.

“It’s deflating,” admitted UConn coach Dan Hurley. “We set lofty goals and really high standards. This team wanted a regular season championship and wanted a Big East conference (tournament) championship. We didn’t get either, but we strived for them, I think, in an honorable way.”

For the next few hours, however, UConn will regret missed chance after missed chance. Opportunity No. 1 came in the first half when Tyler Polley stepped out of bounds as he made a three, wiping the basket out. Adama Sanogo had a nightmare tournament, missing multiple lay-ups and short floaters as he finished 6-of-15 from the field a day after he missed nine of 11 shots against Seton Hall.

R.J. Cole made only one three in six attempts and Isaiah Whaley had a critical turnover late. Against a team of Villanova’s quality, the Huskies were extremely fortunate to even have a chance late.

“We definitely got to look and see the different areas where we didn’t capitalize,” said Tyrese Martin, who was UConn’s best player on Friday with 19 points (4-of-8 on threes) and seven rebounds. “In order to go deep (in the NCAA Tournament), we have to win these games. We can’t let this break us right here. We’ve just got to learn from it and see what we can do better so we can make a great run in March.”

Sanogo, who did finish with 13 rebounds, failed to grab a critical 14th board with 25.1 seconds remaining and UConn down by three. After a Villanova miss, Sanogo was in position to get the rebound, but had it knocked out of his hands and the Wildcats recovered. After Samuels hit two free throws and Andre Jackson a three for UConn, Collin Gillespie was at the foul line with two seconds left and a chance to seal the win.

He made the first try, but missed the second. Martin, though, was unable to get off a shot before the buzzer sounded. Villanova’s large contingent in the stands erupted. UConn’s massive fan base sulked to the exits on its way to the bars or train.

Hurley didn’t want to put the loss on Sanogo’s shoulders.

“I don’t want to micromanage a guy that was like the Kareem Abdul-Jabbar (of the conference),” he continued. “This guy has carried us. We would be nowhere without Adama Sanogo coming into our program. Since he’s been here, the whole program has changed.”

In multiple NCAA Tournament projections, UConn is slated to be a fifth seed. Barring any unexpected developments, it will probably end up in that slot. It’s just a matter of what region, location and opponent the Huskies will receive. And when that news comes in, the Villanova loss will move to their rear-view mirror.

“There’s nothing to be ashamed of here,” Hurley said. “(This loss) is going to hurt like sh*t probably until Sunday morning and then we start thinking of the selection show.”

If anything, UConn got a great preview this week of what’s ahead.

“Friday night, Madison Square Garden, Billy Joel playing, Villanova-Connecticut – if you grew up in the Northeast, it’s a basketball junkie’s dream,” Villanova coach Jay Wright said. “This rivals the NCAA Tournament. We talk about it as coaches in our league. What’s better? The Sweet 16 or playing in The Garden and winning a Big East championship? There’s no atmosphere like this anywhere in the world for basketball.”

The setting was perfect to settle the 2022 version of this rekindled rivalry. Now, it’s on to potentially bigger things for both squads.