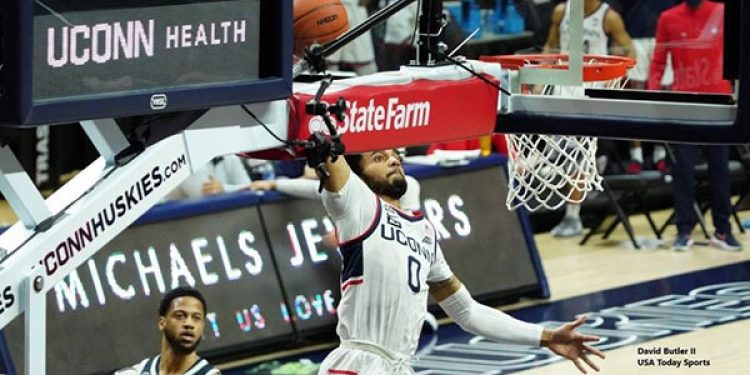 UConn rolls into postseason play after rout of Hoyas

STORRS – Throughout this season, UConn coach Dan Hurley has often found himself going back to the same word: if.

If the Huskies could stay healthy, if they could avoid Covid, if they could just get on a regular practice and game schedule, etc. Five months into this crazy year, those “ifs” seem to have answered themselves in a resounding way at the absolute perfect time.

James Bouknight, UConn’s best player, is back from elbow surgery and hasn’t missed a beat. The team has played seven games in the last 25 days and has developed a chemistry and rhythm not seen in years. And the timing? You can’t ask to enter March Madness on a better note.

On Saturday, the Huskies rolled over Patrick Ewing and Georgetown, 98-82, at Gampel Pavilion in their regular season finale to finish 14-6 (10-6 in Big East play). After falling out of the Top 25 when Bouknight was injured, they are destined to return next week with six wins in their last seven games.

UConn also appears to be a safe bet to reach the NCAA Tournament for the first time in five years, with the Big East Tournament in New York looming next week.

“(Georgetown) is a team that has only lost to us recently and was really, really playing well,” said Hurley, who recorded his 200th career coaching victory. “Patrick, in my mind, is a coach of the year candidate with what he has done with that team. We knew it was important to win the game and finish the ‘irregular’ season.”

Hurley knows the Huskies can’t get complacent, but at the same time, they can take a moment to reflect with pride on what they’ve accomplished in Year 3 of a daunting rebuild.

Prior to the game, UConn honored its seniors, Tyler Polley, Josh Carlton, Isaiah Whaley and Brendan Adams (he still may return next season as he has eligibility), with tribute videos. In all likelihood, it was also the last home game for Bouknight, who is on the fast track to the NBA. They promptly celebrated with their best half of the season, demoralizing the Hoyas, 51-24, on the strength of 58 percent shooting and a monstrous 23-9 rebounding advantage.

In all, UConn shot a season-high 59 percent and were led by Bouknight’s efficient 21 points on 8-of-12 shooting, including 5-of-9 from three. Jalen Gaffney had a very strong showing off the bench, hitting all six of his shots (three three-pointers), with a thunderous dunk in transition mixed in, which excited the biggest gathering at Gampel this season with UConn hosting 200 first responders.

Whaley, Polley and Tyrese Martin all finished with 11 points, while Adama Sanogo continued his strong play in the post with 10 points and 10 rebounds. Earlier this season, the Huskies were Bouknight or bust. It’s all coming together now.

“Playing for each other,” Hurley answered when asked what the key to this effort was. “I thought we got the ball down the court quickly, I thought we were decisive with the shots we were taking, and a good mixture of inside out.”

“We were just looking for each other out there, sharing the ball and just playing with confidence,” Gaffney said. “Everybody can score on this team. It’s just a matter of who’s playing well that day. We have a great offense and today, it just came easy for us.”

Now, it’s on to Madison Square Garden Thursday night for the Big East Tournament. A sentence all Huskies fans have been dying to hear for a long time.

Hurley is ready to prepare his team, especially mentally.

“Now all of the sudden, we’re a sexy pick to make a big run here in March when people thought we weren’t any good not that long ago,” Hurley said. “I’m going to keep these guys on edge. Maybe I need to show them some social media posts where people were just destroying us at our lowest point. I’m going to have these guys revved up for Thursday, I guarantee you that.”

Based on the last month, there’s no reason not to believe that.

“This year, we know it’s the year,” Bouknight said. “We’re just so confident. We know we have a special team and we can make something happen and make some noise.”

Come Thursday, UConn will have its chance to make that noise on the national level again, after what’s felt like a lifetime out of the spotlight. After enduring a season full of ups and downs, injuries, and horribly timed quarantines, there are no ifs for Hurley and his team. They are ready, healthy, and clicking on all cylinders heading into postseason play.