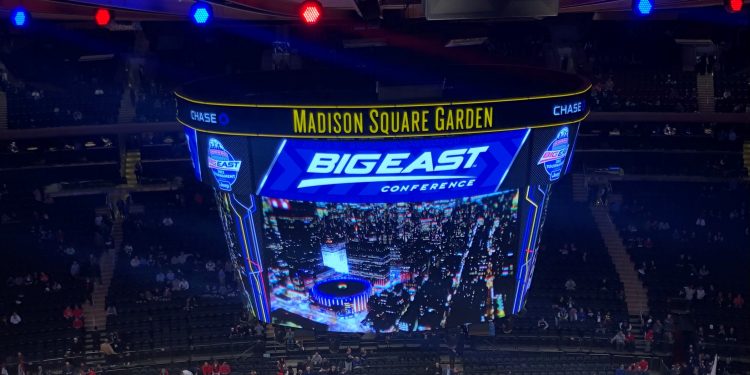 NEW YORK – Teams always give the politically correct answer on how they never look past any opponent, but everyone knows the truth in this situation – UConn and Villanova have been eyeing Round 3 since the Big East Tournament bracket was finalized last weekend.

In different fashion, each team took care of business Thursday night in the quarterfinals at Madison Square Garden to make this a reality. On the strength of their smothering defense, the Huskies won 62-52 over Seton Hall. Meanwhile, Villanova, thanks to Brandon Slater’s two free throws with two seconds left, held off upset-hungry St. John’s, 66-65.

Sixteen days ago, UConn pulled off a miraculous last second comeback to defeat the Wildcats, 71-69, leading to the fans storming the court at the XL Center. A few weeks earlier, Villanova cruised past the Huskies in Philly.

“This is our first Big East Tournament, like legitimate, authentic,” UConn coach Dan Hurley said. “It was just electric.”

UConn’s defense was in electric as it held the Pirates to 35 percent shooting, with Jared Rhoden and Alexis Yetna missing 17 of their 21 attempts. Andre Jackson, once again, was all over the place, forcing tough shots, diving on the floor, blocking a shot and finishing with two steals. If you only look at the box score, you miss seeing what a dominating presence he is. That was the case in the last Villanova meeting when he helped swarm Colin Gillespie, holding him to only nine field goal attempts and a critical turnover in the final seconds.

“The stat sheet lies a lot with game impact,” Hurley said. “He was such a huge impact all over the court. He’s enhanced the games of (R.J.) Cole and Adama (Sanogo) and Tyrese (Martin) – all the guys that kind of get the scoring and production on the offensive end. Guys like Andre and Isaiah (Whaley) makes things so easy for those guys because they are so unselfish.”

Cole and Martin led the Huskies (23-8) with 17 points apiece, while Whaley had 10 points and four blocks. UConn had multiple long stretches without any offensive rhythm as it shot 36 percent, but its defense never let this game get in doubt.

“We can’t stray from our defensive identity,” Cole said. “That’s who we are as a team, as a group. We continue to harp on that every day. And that’s how we got these wins.”

To beat Villanova again, though, the Huskies will need a better performance than they received from Sanogo on Thursday. Sanogo, who was a force in the last meeting versus the Wildcats with 20 points and eight rebounds, missed nine of his 11 shots as Seton Hall hit him with hard double teams. He had multiple shots sent back and hesitated when looking to pass out of the block.

Hurley went with a seven-man rotation with Tyler Polley (six points) and Jalen Gaffney used off the bench. Reserve Jordan Hawkins sat out with a concussion, an injury Hurley thinks will keep him out of this tournament. Akok Akok, in and out with injuries over the last six weeks, did not play. Hurley did mention, however, that he still envisions Akok playing an important role at some point this postseason.

It wasn’t pretty for either UConn or Villanova on Thursday, but each team found a way to survive, giving the league and its fans what they wanted: Round 3.

“The big dogs play in the quarters and semis,” Hurley said. “It’s going to be insanity in here.”

Without question, it will be a loud, split crowd for both sides.

“We’ve got the best fans in the world here at UConn,” noted Cole. “And The Garden is a special place.”