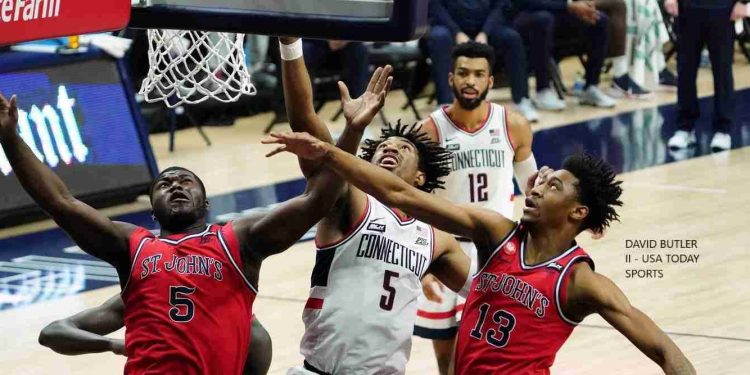 STORRS – After losing James Bouknight to an elbow injury halfway through its game to Marquette, UConn found a way to get out of Milwaukee alive with a win despite an 18-point deficit. It then went to Indianapolis and Chicago without its All-American candidate and beat Butler and DePaul, respectively.

After jumping out to a 21-7 lead against St. John’s Monday, the Huskies had the look of a team that could overcome any type of adversity thrown their way. However, you can only survive for so long without a player of Bouknight’s caliber.

The Red Storm methodically worked their way back and ultimately wore down a suddenly offensive-challenged UConn squad, escaping Gampel Pavilion with a 74-70 victory in the first meeting between the schools in nearly eight years. UConn (7-2, 4-2 Big East), which entered the Top 25 for the first time in over four years last week, will probably fall out of the rankings when the next poll is released Sunday.

It’s too harsh to call to the Huskies’ three wins without Bouknight a mirage, but it’s clear it will be a struggle without his offensive playmaking ability. UConn, led by R.J. Coles’ four early three-pointers, ambushed the Red Storm early. The Huskies then hit a wall, hitting only one three in the second half and missed 12 lay-ups in all. Without Bouknight, who had surgery on his injured elbow last week, they had no one to bail out the offense when possessions were falling apart.

UConn coach Dan Hurley pointed to his team’s guard play as the main cause of defeat.

“Posh (Alexander) dominated our guards in the last 10 minutes and that was the difference,” Hurley said of the St. John’s guard, who led the Red Storm with 18 points and six assists. “We need a lot more production from the guards. Especially when they went so small in the last 10 minutes.”

After his hot start, Cole finished with only six more points to finish with 18. Tyrese Martin added 14 points, but only made four of his 11 attempts, and missed two free throws with Huskies down one and only 18 seconds left. Jalen Gaffney scored only three points and was a minus-10 in 11 minutes of play.

Simply put, that is not going to cut it with Bouknight on the shelf.

Despite season-ending injuries to Tyler Polley and Akok Akok a year ago and Bouknight’s current situation, the Huskies had won 12 of 13 dating back to last season. Sure, they may have been due for a loss. At some point, though, the serious injuries are bound to take a toll. The Big East is a much tougher conference than the AAC, as St. John’s (8-7), which received a big 15 points off the bench from Marcellus Earlington, showed. In the second half, the Red Storm hit six of their nine three-point attempts and had an answer every time UConn increased its lead into the eight-to-10-point range.

“Obviously, credit St. John’s,” Hurley said. “They were just so relentlessly competitive. They were tougher than us, especially down the stretch. We obviously shot ourselves in the foot quite a bit.

Polley coming off a monstrous road trip, struggled mightily, and missed everything on a three-pointer that would’ve tied the game with seven seconds remaining. Speaking of Akok, he only played two minutes in his fourth game back after suffering a torn Achilles last season. While Hurley is slowly working him in, he doesn’t expect the player UConn saw last year for quite a while.

“It’s a challenging situation, because he’s a heart and soul (type of player), and he’s a pillar” Hurley said. “Akok and Bouk are building blocks that we’re building this thing around. Akok’s just not ready to be out there physically. I thought getting him in there up 14 was a good time. Bu there’s so much rust and he missed so much time. We’re going to have to try to develop him in practice and get him in a place where maybe he can help us at some point this year. He’s just so far behind.”

The Huskies’ game at home on Wednesday has been postponed due to the coronavirus within the Xavier program. On Saturday, they will look to avenge their loss to Creighton on the road. In defeat, Bouknight poured in 40 points.

Finding a way without him will be a major challenge, a challenge they were unable to overcome Monday.