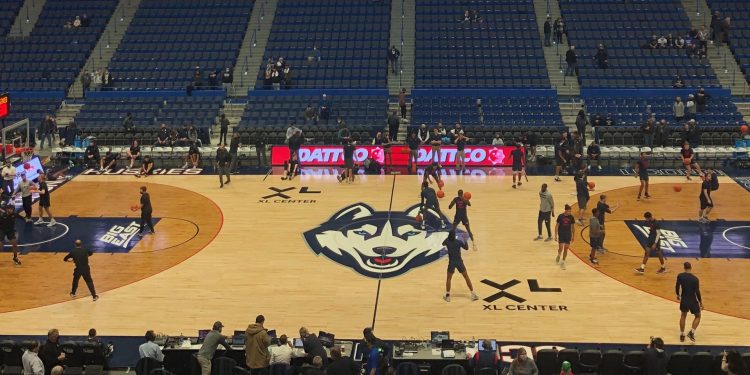 The 24th-ranked Huskies, on the backs of Adama Sanogo (24 points, 15 rebounds) and Tyrese Martin (18 points, 15 rebounds), left a rowdy XL Center with an 80-72 win. The victory ended a frustrating two-game losing streak for UConn, a streak in which Martin said the team lost their identity.

Wherever it went, it’s back. UConn outrebounded the Eagles by 19 (46-27), fought off multiple rallies, and shot well in all phases (47 percent from the field, 42 percent on threes, 87 percent at the foul line). It was the second win by the Huskies this season over Marquette, which had won eight out of nine in jumping to 18th in the country.

Don’t be surprised to see these teams meet again come March at the Big East Tournament. After the game, both coaches lobbed some praise each other’s way.

“I am just really, really impressed on how (the Huskies) play,” added Smart. “They are going to win a ton of games and go a long way if they play like they did tonight.”

UConn (16-6, 6-4 Big East) played one of its better halves of the season, jumping out to a 38-24 lead en route to a 10-point halftime advantage. In addition to Sanogo dominating the paint and Martin showing versatility all over the floor, freshman Jordan Hawkins hit two big threes and had eight points.

It was never going to be easy, though. The Eagles, paced by Olivier-Maxence Prosper’s 18 points and 17 apiece from Justin Lewis and Greg Elliot, cut the lead to one halfway through the second half. UConn did not give in, however, and built it back up to nine.

Marquette had one final run, cutting the lead the down to six with 2:20 remaining. While not pretty, the Huskies scrapped and clawed and ultimately knocked Marquette out. Martin missed a shot outside the paint, got the offensive rebound and scored, and the flexed to the crowd. As that was happening, Andre Jackson stole the inbounds pass. R.J. Cole missed a lay-up, but Jackson got the rebound back. Martin missed a three and, you guessed it, UConn got the offensive rebound, this time by Sanogo. Jackson was fouled and made one of two free throws.

The Eagles, after that sequence, finally had the ball with only 47 seconds left and it was a three-possession contest. Ballgame. And the identity that was missing for the Huskies in losses to Creighton and Villanova was back.

“When we are at our best, we’re not a team that people look forward to playing against because of what we could do on the backboards to go along with our athleticism,” Hurley said. “That’s our identity.”

“Their length and athleticism is as good as any team in the league,” noted Smart. “They played hard. We always talk about playing with violence, they were the more violent team today. They played with a better physically than our guys. When we cut the lead down, they had great resolve and they said, ‘you’re not coming in here and doing this.’”

The road doesn’t get any easier for the Huskies, who travel to No. 25 Xavier on Friday, followed by a trip to The Garden on Sunday to face St. John’s. The Red Storm nearly stole a win in overtime at Gampel last month.

“What this team has gone through, with the noise, the unrest, and the hysteria that comes with losing at UConn, you just have to be able to turn it off,” Hurley said. “Delete Twitter, don’t go on socials, just focus on what we have to do. We’re in a great place as a program and as a team to have a great last month of the regular season. We have as good a chance as anyone to win the Big East Tournament and we’re the type of team that could do damage in March. We just have to focus on that and turn off the outside noise.”

In the Big East, that may also mean some blood and violence on the court. UConn showed Tuesday its ready for those fights.