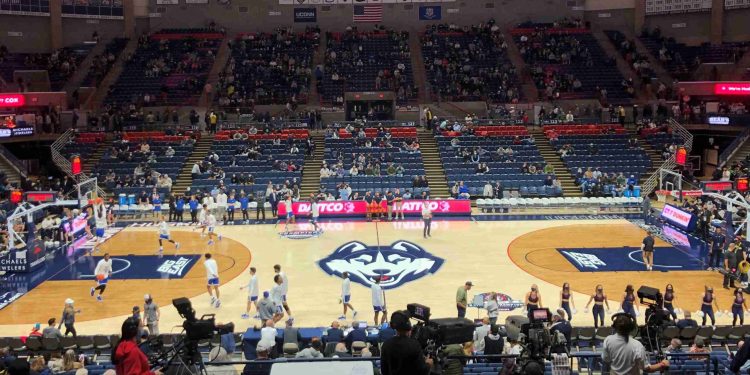 STORRS – For a new team’s chemistry to peak, it often takes time, some bumps in the road and then, ultimately, success.

UConn has defied that normal path. With authority.

After plowing through the Phil Knight Invitational in Portland over Thanksgiving weekend, the Huskies returned to a sold out and amped up Gampel Pavilion and rolled past Oklahoma State, 74-64, in the “Big East-Big 12 Battle.”

UConn (9-0) is ranked eighth in the country, its highest mark since 2012. Expect another bump in the rankings when they are released next week.

“I don’t know if eight is high enough for this team,” raved Oklahoma State coach Mike Boynton. “I saw a team, in my view, capable of winning a national championship.”

Andre Jackson, one of the few returning players from last season, made his first start of the season and began it in style, throwing down a dunk off an alley-oop on the Huskies’ first possession. He used the word sacrifice multiple times in his postgame interview to describe why this has worked so well, so quickly.

“I credit everybody for sacrificing. Everyone has to do it, if not, the team chemistry won’t be there,” said Jackson, who filled the stat sheet with 11 points, seven rebounds, six assists and three steals. “Everybody came in and bought into coach (Dan) Hurley’s system. Everyone’s accepted their role, played to their strengths and not their weaknesses.”

“The longest run I’ve had in college was 18 (wins) in a row at Rhode Island and the thing about that team was that they celebrated each other’s success,” Hurley said. “They knew that scoring a couple of more baskets a game wasn’t really going to impact career opportunities down the line. It was about the quality of what was being put on the court and winning big. Winning big does more for your career than scoring empty points and hunting numbers on a losing team.”

After combining for only six points in Sunday’s win over Iowa State, Jordan Hawkins and Adama Sanogo rebounded in impressive fashion. Hawkins scored a career-high 26 points, hitting five of his nine threes. Sanogo was a force in the paint with 20 points.

Boynton gave Hawkins, a sophomore, the ultimate praise for a UConn guard, comparing him to Richard Hamilton and Ray Allen.

“That means the world to me,” said Hawkins, who missed two earlier games in concussion protocol. “Me and Rip, we grew a relationship over the summer, and that is great. I’ve learned a lot from him. Ray Allen is a Hall of Fame player. At the end of the day, I am Jordan Hawkins. I need to create my own name and own legacy.”

Just like in Portland, the Huskies used a big run to take control, this time rolling to a 23-3 advantage to wrap up the first half. They led 48-31 at halftime and never looked back.

The Cowboys, paced by Kalib Boone’s 15 points, only converted on 39 percent of their attempts, as UConn forced 17 turnovers and blocked three shots. Despite being in control for most of the night, Hurley was on edge in the nerves department.

“This was a big one for me,” Hurley said. “I was a little agitated all day because I knew this was a dangerous game. They are a team with a lot of talent, length and could match up with a lot of the things we bring. They were a team looking for a signature win that would really change things for them. To get that type of separation and keep the lead in double digits was big. I believe in this team.”

UConn is now off until Wednesday when it visits Florida. These teams have played in some memorable games over the last decade, notably in 2013-14 when Shabazz Napier hit his famous buzzer-beater at Gampel, followed by the Huskies prevailing in the rematch at the Final Four.

“Great teams, they win away from home,” Hurley said. “If you really want to build a resume, (this is a chance) to send a message about how good you are. It will be a hostile environment and obviously we are going to go in there highly ranked. It’s a chance to pick up a big road win.”

Early indications have shown this team is up for that type of challenge.