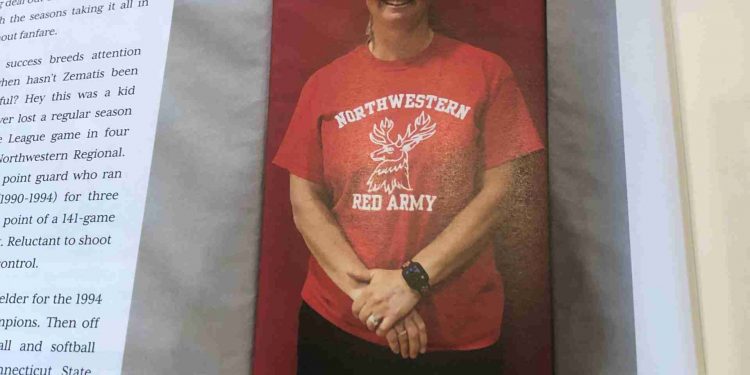 Under Zematis, The Winning Ways Continue at Northwestern Regional Continue

It’s not that you don’t notice Stacey Zematis. Unassuming by nature, she just doesn’t make a big deal out of it all, rolling along with the seasons taking it all in without fanfare.

But success breeds attention and when hasn’t Zematis been successful? Hey this was a kid who never lost a regular season Berkshire League game in four years at Northwestern Regional. A cerebral point guard who ran the show (1990-1994) for three years a focal point of a 141-game BL win streak. Reluctant to shoot but always in control.

Also, an outfielder for the 1994 BL softball champions. Then off to play basketball and softball for Western Connecticut State University.  Zematis lived an awfully lot of her sporting life on the mountain top.

That was then and this is now. But it didn’t end there. Northwestern won its fourth straight BL softball title this spring. For Zematis it was her eighth title in 19 years. A title almost every two years? That’s a dominant program. A career mark of 292-110 (.712)? That’s the kind of impressive that makes you take pause. Then clap.

You can’t escape dad when talking about Zematis. Fred Williams. A legend in Connecticut high school basketball, approaching 700 wins with that 141-game BL win streak, a tractor-trailer full of BL titles and a state title. Combined with his girls’ soccer wins around 1,000 times with the better score.

They were together at birth and have never been far apart. Both work at Northwestern, Fred the Athletic Director, Stacey the head of the P.E. and Health department. Fred still coaching and winning, Stacey there at his side as JV coach.

Footsteps are a precarious adventure. Pressure following the great, living up to expectations. But father and daughter have never gone down that path. They walk together. It’s all been good. Stacey loves her father’s path and is part of it. But she has forged her own trail with an inevitable huge dose of dad’s influence.

“Dad taught me everything, his love for girls sports and how to deal with them,” said Zematis. “He has a way about him. I idolize the way he gets the girls to do their best and like him. They have fun while getting better. They come to his office and talk to him all the time. It’s about team and family. His office and program are always a safe place.

I have never looked at it as following in his footsteps. We do so much together, and softball is my thing. “

Meanwhile dad has watched his daughter grow as the years have passed.

“Growing up Stacey wasn’t the most confident person,” says Fred. “Like her reluctance to shoot in high school. She overcame that. She is very confident in her abilities as head of her department in school and coach of the softball team. She has developed so much confidence. As she became successful it was, I can do this.”

Fred won’t tell you this, but Stacey will. She coaches a lot like dad. Fred says, “She gets her expertise from mom (Donna). Now if you watch mom work at Northwestern as the Director of Operations of House 2 in the high school (my title) she’s a little like Captain Kirk with 8,000 things going on at once and in control of it all. So, there is definitely some mom influence here.

But listen to dad’s description of some Stacey’s attributes.

“She takes it serious and has fun with the kids,” he says. “She expects them to work hard and gets discouraged when the kids don’t put forth the best effort.  Because of her organization and nature kids expect to work hard and it breeds team attitude.”

The softball success has not come easy despite the gaudy numbers. While aided by a number of solid pitchers over the years like Ava Blanchard this past season, there has never been the stud pitcher like Heather Baehr of Lewis Mills, Lisa Hurlbert at Thomaston, Jamie Bridges at Terryville and Mary Percy at Shepaug to name a few.

The Highlanders’ success has leaned heavily on solid defense and potent bats. And the community atmosphere.

“Much of our success in softball is because our girls are very tight, they get along,’ says Zematis. “We’ve had teams not as talented, but they got along and worked through things.”

But the mold is certainly nourished and perpetuated by Zematis. She has navigated the program into an enviable combination of sportsmanship, the idea of team and teachable moments. Skills needed for life. One of her proudest moments was having a player apologize to an opposing coach for an indiscretion this past season.

After almost two decades Stacey Zematis has forged her own path aided by much as all successful journeys are – a legendary dad, supportive family, talented players and program assistants, the right values.

She goes about her business quietly. But there is a loud legacy being created here.