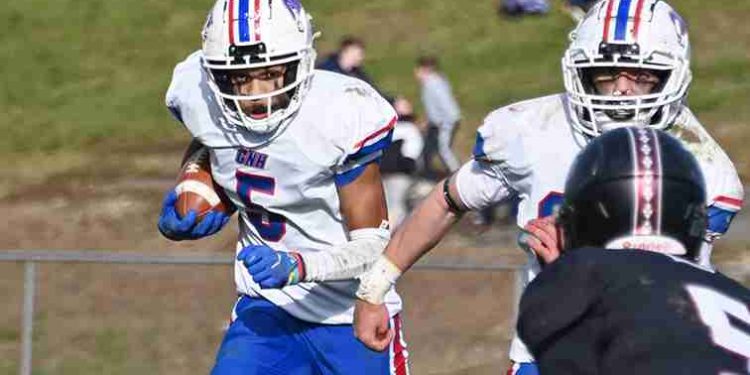 DEEP RIVER, Dec. 4, 2022 – There were so many moments of excitement during the 2022 campaign for the Gilbert/Northwestern/Housatonic co-op football team that led to Sunday’s Class SS semifinal against Valley Regional/Old Lyme with an opportunity to advance to a state final.

The Yellowjackets returned to the Naugatuck Valley League for the first time since the 1930s and won a divisional championship, claiming the NVL Division II title with a perfect 7-0 mark.

A week ago, the Yellowjackets dismantled Windham, 34-0, a team that handed Class MM finalist Killingly (11-1) their only loss of the season in October.

There were a few more moments of excitement on Sunday but not enough.

Valley Regional/Old Lyme (11-1) returns to the final for the second time in school history and will face Joel Barlow. The last time Valley played for a championship in 2014 when they stunned Ansonia, 21-20 in the Class S Large Division final.

Gilbert/Northwestern/Housatonic (9-3) was looking for their first-ever title berth. They advanced to the semifinals in 2010 before bowing to Joel Barlow.

Outside of an 89-yard touchdown run on the first play of the game, the Warriors were able to contain Camp, a dynamic speedster who had ignited the Gilbert offense all season long.

“We had a layered approach to our defense and had the secondary coming up to make tackles. That was the mindset,” Valley Regional/OL coach Hill Gbunblee said.

Valley Regional focused on not allowing Camp nor Gilbert QB Nolan Reisdorf the opportunity to break to the outside and move up field. It left plenty of opportunities for Yellowjacket back Aiden Avenia to run the ball up the middle but it denied Camp and Reisdorf the chance to make big plays.

Gilbert head coach Scott Salius was disappointed but saw the big picture on a cool but sunny afternoon in Deep River.

“It’s much better to lose here on Sunday in the semifinals than to not be here at all,” he said. “It would have been great to play for a state championship but this is the next best thing. They deserve what they have earned (this season) and they should be proud of themselves.”

Camp had the Yellowjackets fans out of their seats early with an 89-yard run up the right sideline on the first play of the game for a 7-0 lead.

“I thought, here we go. This will be a game,” Gbunble said. “I would rather earn it the hard way than make it easy.”

On their first drive, Valley Regional/OL had first and goal from the Gilbert six-yard line. The Yellowjackets held but on their second drive, LaCourcierce found Cox open for a 33-yard touchdown reception to tie the game at 7-7.

Valley took a 14-7 lead on a 13-yard touchdown pass from LaCourcierce to Cox on the first play of the second quarter. LaCourcierce kept the 10-play, 51-yard drive alive by completing a 16-yard pass to Cox on a fourth down and four play.

“They were trying to key on me so I know Nick would have a field day going one-on-one,” Jean-Pierre said. “(Nick) is just as good as me, just as aggressive, the same kind of playmaker. You can’t key on me because Nick will have a great day.”

Cox finished with a game-high six receptions for 74 yards.

Gilbert made life difficult for themselves with six penalties for 75 yards, including two personal foul penalties, a roughing the passer call that extended one drive and a pass interference call.

“They are hard enough to defend with their running, their inside passing game. their inside sweep plays,” Salius said. “Part of our problem in the first half was giving them opportunities we couldn’t afford to give them.”

The Yellowjackets tied the game at 14-14 with Camp scoring from the 10 with 4:36 left in the third quarter. But the bulk of the work on the eight-play drive was done by Avenia, running between the tackles for 33 yards on six carries.

Valley Regional/OL responded quickly with Jean-Pierre scoring on a 57-yard draw play, evading several Gilbert defenders and breaking several tackles along the way to increase the lead to 20-14 with 2:13 left in the third quarter.

The Yellowjackets responded, led again by Avenia, who gained four yards on a fourth down and two play to keep the drive alive and gaining four yards on another third down and four play for a first down.

But on a fourth down and four play on the Valley Regional 28-yard line, Camp was sacked for a two-yard loss and Valley took over on downs.

Jacob Rand raced 44 yards and Max Novak rumbled for 24 on consecutive plays to put the ball on the Gilbert one-yard line. Two plays later, Rand scored with 7:19 remaining to extend the lead to 12 points, 26-14.