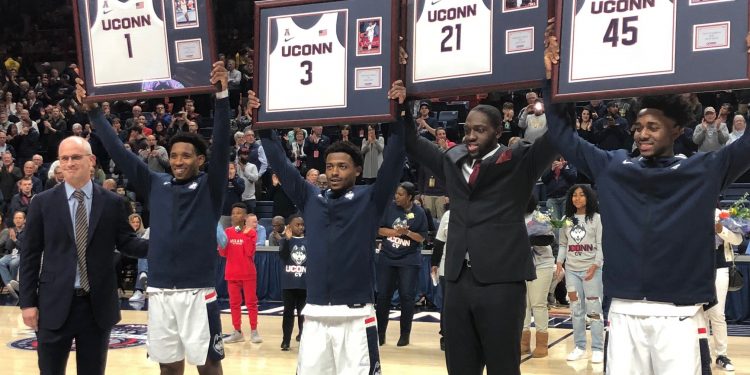 One year ago, March 5, 2020: Vital, Huskies thrill raucous Gampel with win over No. 21 Houston

STORRS – For a variety of reasons, the final scene of UConn’s 2019-20 Senior Night, which saw the Huskies defeat No. 21 Houston, 77-71, with Christian Vital taking the mike for an impromptu postgame speech, was hard to envision.

Two years ago this month, the Huskies wrapped up a miserable 14-18 season which included eight losses of 15-plus points and the ultimate firing of Kevin Ollie. Vital, then a sophomore, was all but done at the school, putting his name in the NBA Draft and even considering transferring.

UConn then hired Dan Hurley and pretty quickly, he and Vital butted heads with both parties publicly admitting that they struggle to work with each other.

Last season, UConn was ousted by Houston is the second round of the AAC Tournament by 39 points. This year, the Huskies have lost eight games by seven points or less with three of those defeats coming in overtime.

No one could blame Vital if his morale was low. However, those sets of adversity, instead of breaking the bond between Vital and the program, only helped the marriage grow. Hurley has raved how Vital, over the last six or seven weeks, has grown into the perfect model of a veteran leader, helping younger players and not worried about them stepping on his toes as a senior star.

What did Vital learn?

“Don’t run from adversity,” he said. “Times could be tough, but if you see some potential in an opportunity, take it, stay strong, and don’t just quit when things get hard. Try to figure it out.”

It was only fitting then that in Vital’s final regular season appearance at Gampel Pavilion, which was incredibly loud from start to finish, ended with one of the best performances of his career: 26 points on 8-of-14 shooting, 8-of-8 from the foul line (all in the final minute to seal the win), and a game-best +21. In the process, he passed his good friend and former teammate, Jalen Adams, and moved into 10th on the all-time Huskies’ scoring list with 1,707 points. He then took the mike, praised his team, the fans, his family, God and….Dan Hurley. Yes, Dan Hurley.

They have come a long way. And along for the ride has been the UConn program, which is now 18-12 with high hopes of wreaking havoc at the AAC Tournament in Texas next week. After the speech, Vital’s teammates jumped on him like they had just won the World Series.

“That’s my guy now,” Vital said of Hurley. “We’re cool now. It wasn’t always the best times with me and him, but one thing about each other is that we’re resilient and we want to win and we’re competitive. I think once we started to understand each other more, we started to put it together and that’s what you’ve been seeing the past few weeks.”

The morale of the program is at a high not seen in multiple seasons. Vital, who has scored at least 18 points in his last six games, is a significant reason why. Thursday night’s win, which saw the Huskies come back from a seven-point halftime deficit, was a prime example.

“Christian did not want to lose. He never does,” Hurley said. “He’s a very stubborn guy, especially when it comes to competing. (I’m proud) to see the evolution in the last six to seven weeks, in particular, but also over the course of these two years. There were times last year where I wasn’t sure if we could co-exist. But that’s the joy of coaching – to see a young man just change and mature and develop to what we’ve seen at the end of this season. He’s a been great player. He’s played as well anyone in the conference.

“We’d be lost if he didn’t take that leadership mantle.”

“I’ve had a lot of respect for him since he was a freshman. He’s a tough kid,” said Sampson, who congratulated Vital after the game. “He’s gotten better and better. I voted him first team All-Conference.”

After suffering through losing seasons in each of his first three seasons, Vital is clearly enjoying the resurgence of the program, especially this victory.

“It meant a lot. I ain’t going to lie, it meant a lot,” Vital said. “Just everything the program has been through, what some of my teammates have been through, some of the stuff I’ve been through personally…to be able to win like that, in front of a crowd like that on night like this, I’ll remember it for a long time.”

When the final buzzer sounded, Vital stood at midcourt and screamed in excitement. When he grabbed the mike moments later, he did the same to the chants of “M-V-P.”

“I tried to take the moment in real quick, being the last game at Gampel,” Vital said. “It was a great night for the program, for the way things are headed, and for the momentum we have right now. I think it was great for everybody involved.”

Along with Vital, the Huskies got another strong game from James Bouknight, who had 17 points, including a four-point play to start the comeback and a dazzling lay-up late. Isaiah Whaley had 13 points and five rebounds, and in maybe his last home game, Alterique Gilbert finished with nine points.

“This team is different. This team believes,” Vital said. “A lot of guys have been through things personally and we want to turn that table around. We’re doing it as a team. We’re fueling that fire and we’re putting it together.”

The team is different and Vital is different. This night was once hard to envision. It happened, though, and UConn is on its way back to what it once was.