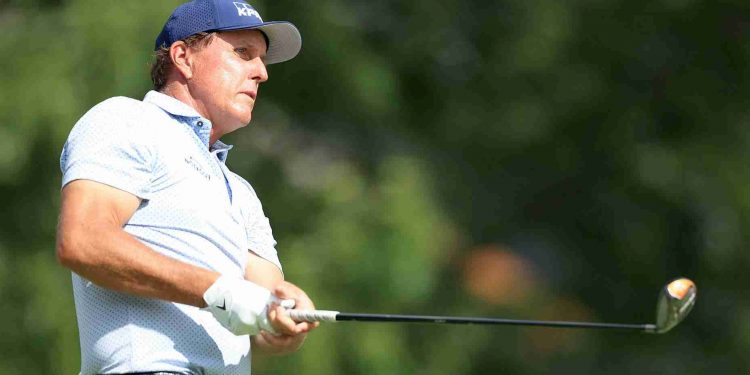 It was a simple question posed by my son as I sat molded to the couch with a not so simple answer.  It was a sweltering mid-summer Sunday afternoon, the heat sucking energy from the body like an embalmer drains blood. Wanting no part of the outside, I was safely ensconced watching some golf, movement not on the schedule.

I was honed in on my guy Phil (Mickelson) who had no chance to win but hoping for a strong finish. However he quickly went from 3-over to 4-over to 6-over and that was in the first three holes, eventually finishing at 9-over for the tournament with a 78. The conditions were U.S. Open like at Muirfield Village in Ohio, the rough torturous and the greens dotted by brown spots like an omelet on the griddle and quicker than a stampede to get the Sports Illustrated Swim Suit issue.

Making the cut these days seems to be Phil’s victory. He has struggled this year and at 50-years old you wonder if the day is done. At least as a winner. There was hope at the Travelers for two rounds but then oblivion followed. There was a third-place finish early in the year at Pebble Beach, his only top 10. Hence the question from my son. He knows I bleed Phil and we both know the end is near. Not ruling out one last blast but the window is closing and if and when he goes to the Champions tour I will watch but it won’t be the same.

We were at the Jersey shore for Phil’s last major in 2013 and on one of those perfect beach vacation days I sat in our rented house glued to the TV until Phil completed his comeback and win. My son came back to the house twice to make sure I hadn’t fallen off the deck, had a subdural hematoma, or just skipped town to avoid paying for lunch or supper.

Phil is just one of those less than a handful of guys I have lived and died with over the years. Jimmy Connors grabbed me the same way in tennis. The fight and fury of Connors and never say die attitude just kept me glued for the duration. You remember the brilliant run at the age of 39 in the 1991 U.S. Open, the comebacks and amazing point against Paul Haarhuis (go watch it). I watched it all. You remember all the battles with Borg and McEnroe. Connors got old, Connors’ game never did.

There have been others high on the list – Ali, Brooks Robinson, Larry Bird, Lawrence Taylor. Bill Russell.  Maybe none have owned my passion like Connors and Mickelson, however.

I have done handstands and fist pumps over Phil’s major victories and worn smiles for days.  I have been mesmerized by his short-game magic. I mean the man could chip in from the back of a dog or a moving car. Victories have made me The Golf Channel’s best customer. I have watched  Phil hit trees, hit the ball in the next county, hit the ball on to hospitality tents, and blow the U.S. Open seemingly more times than John Daley has popped open a beer. I have had a lifetime of morose Sunday afternoons.

Mickelson has been majestic in both victory and defeat. He is a Hall of Famer and every man. He flies a plane, is a great family man, is one funny dude and is guy you want to have a beer with. Tiger was too perfect in his prime for me. Phil was always like the prom invite that said yes and then broke your heart. You never have known with Phil. So good with 44 wins and five majors and then so tragic with six U.S. Open runner-ups, many just victory suicide. He has been the ultimate roller coaster ride.

Now he is fighting time. He has held his own but nobody wins in the end. And at 50 you just want what everybody wants – one more time.

So as Phil’s time in contention drifts towards life support, WHO’s NEXT?

Heck, I don’t know. Nobody ever replaced Connors for me. Appreciate Federer, Novak, and Rafa but don’t make a point to watch all the time. Don’t live and die with any of them. Nobody else has caught me in any sport.

There are athletes you like, but I’m talking about the very few over time that make you watch, that touch that chord in you, and draw you in. You need to know what they are doing. There is no escaping them.  Phil is the ‘No honey’ guy. No honey I’m not going to Talbot’s with you. No honey I’m not cleaning the damn attic or going to Costco to pick up that 80-pound piece of Salmon you want today. When Phil is in the hunt my wife knows. “We’re not getting dad off the couch this weekend,” is the common refrain.”

I just don’t see anybody working their way up for me to take over. I root for the Orioles in baseball.  They are on a Tri-State level these days having barely won a hundred games in the last two seasons. I can’t name three players on the team.

The New York Giants have Saquon but he doesn’t make you watch. You just appreciate when you do watch. The Celtics have some young stars like Jayson Tatum, Jaylen Brown, and Kemba Walker our old UConn hero. But I don’t set my schedule by them.

There are plenty of guys in golf – Rory, Jordan Spieth, John Rahm, Justin Thomas, Dustin Johnson, and the list goes on. But nobody has hit the chord.

In the long run, you don’t really pick somebody that’s going to be your athletic love affair. It’s not like picking lunch meat for tomorrow’s sandwich. They pick you with some kind of alluring characteristics. It is different for everybody.  There is no formula, you just know.

So I don’t know. Who’s next? I haven’t the slightest idea. Maybe nobody. I hope somebody steps forward. It just makes it all that much better. They make and break your heart. In the meantime, I’ll just root for Phil until he’s 80 still trying to chip in from behind a house and succeeding once in a great while.