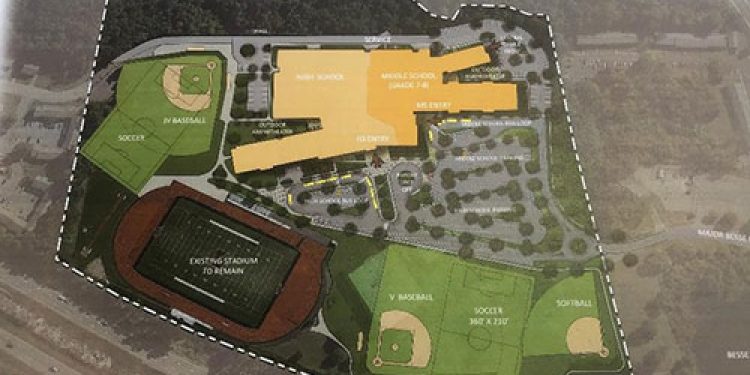 By now, most of you who have been keeping up with the proposed Torrington High School/Torrington Middle School project know the basics.

On November 3rd, voters in Torrington will be asked to vote yes or no on a referendum question.

Do you want to support the building of a $159.6-million-dollar project to build a new high school, middle school, and central office facility?

By a simple majority, the project will either go to the next step or be put to the side.

Since I first heard of this project, I have been in favor of it for a lot of reasons.

First and foremost, after being presented with the options of building new or repairing the old, the new option made more sense to me based on cost.

Saying no to this referendum doesn’t mean that it’s not going to affect home and business owners in the way of increased taxes, it just means we will be paying to repair a nearly 60-year old high school.

You’ve seen the numbers on the back of this magazine.

To build a brand-new school that includes grades 7-12 (the way the state wishes to see future construction), the Board of Education and a host of other outstanding features will carry with it that price tag of $159.6 million.

To repair the current high school will run (estimated) $112.2 million and be done over a number of years.

Let’s face it. The current THS building doesn’t owe us a penny, we have squeezed every bit of life out of it.

Many have questioned the wisdom of taking on this project in the middle of a pandemic. At first glance would seem to make perfect sense.

Looking closer at the timeline of the project would tell a different story though.

On November 3rd, if we residents say yes, the next part of the journey, the design and permitting phase would take place from January of 2021 to February of 2022. The project would be on a project list from the state of Connecticut and approved in the spring of 2021.

Building new gives us more help back from the state to the tune of $85 million (estimated), bringing the cost to Torrington down to $74.6 million.

Repairing the existing facility is estimated to run in the $112.2 million dollar range with only $33.9 million (estimated) being covered by the state.

We would be on the hook for $78.3 million (estimated) or nearly $4 million dollars more.

Nobody wants their taxes to go up, but one way or another, we are going to have to pay the piper at some point.

I feel this is a unique opportunity for Torrington to take a chance on itself by taking the leap, betting on us. Betting on what might happen if we do this.

Having a crown jewel of a facility would be a tremendous accomplishment for this community.

A thought process for families who are considering moving to Torrington or any community is ‘how are the schools?’

We have all asked it.

The 7-12 model is used at Lewis Mills, The Gilbert School, Shepaug and many others.

It’s an advantage, not a draw back.

With two separate and secure entrances for the students, it allows students and parents of the younger grades to feel comfortable with the next stage of their child’s development to be a safe and secure one.

To those who wonder if a new school will improve their child’s education, I’ll say no, a building won’t but the terrific students, teachers, administrators and parents who are and have been doing that every day for decades will assure that it continues.

Torrington schools have sent more students to Ivy League schools than any in area. More music majors end up at world class institutions like Carnegie Hall. I could go on and on.

When this pandemic first hit, I put together a Heroes Magazine to pay tribute to those fighting Covid-19 on the front lines.

Outstanding heroes like Mariah Cerruto (Class of ’12) who works in the Emergency Department at St Francis Hospital in Hartford or Krista Traub (Class of ’12 who was working as a Registered Nurse in New York City, the hardest hit in the early stages.

Or Michael Ciesco (Class of ’02) who works for the Department of Corrections or Jonathan Wing (Class of ’02) who is a Attending Physician at Massachusetts General Hospital in Boston, another area that was so hard hit back in February and March of 2020.

These and thousand more have gone on from this Northwest Corner school to make a significant difference in our world.

It’s not the building, it’s the people in it who make it great but at some point, we need to be okay with giving ourselves an even better opportunity to attract families to our schools and to send out into the workforce the kind of individuals that are needed to fill jobs in 2020 and beyond.

If we say yes, the new building construction is due to start in March of 2022 and be completed by August of 2024 with the current high school never shutting until the new one is complete.

Students during that time frame will be able to watch the new building be built in the open field behind the home bleachers.

Occupancy is scheduled for September of 2024.

On the tax front, nothing is scheduled to hit the taxpayers of Torrington in 2021 which is a blessing as we hopefully work our way out of Covid-19.

As I said earlier, we cannot lay back and do nothing.

Fixing the existing school is not something we can put off.

Many a question has been raised about the maintenance of our facilities and it is certainly a valid point.

If we do not maintain our schools now, what makes folks think we will do a better job in the future?

That is certainly and issue that the city and the school system need to get a handle on.

How things were done in the past can’t be changed but we need to do a better job in the future.

As I have said many times in the past, I am Torrington, you are Torrington. We make this community what it is.

If we believe we can do great things, we will.

It will though, take making a leap of faith on November 3.

I for one am voting yes for the future of our children and of this already tremendous community.

For more information on the school project, go to voteyesnewschool.com.