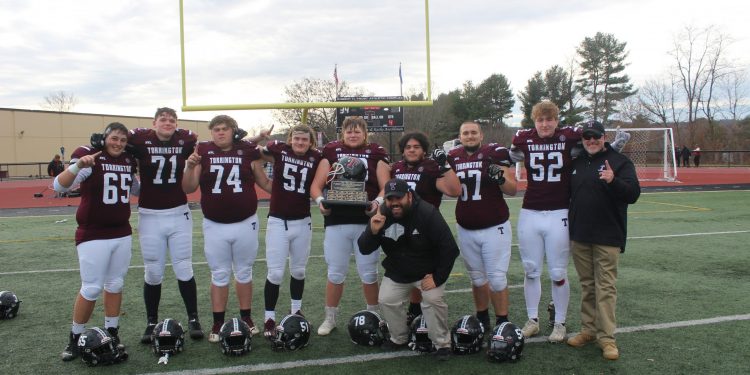 Win or lose Raiders’ Rodriguez has always gotten it right

TORRINGTON – Gaitan Rodriguez has chased away the rain that has dogged his football program repeatedly during his nine-year tenure as Torrington High football coach. Now he gets to stand in the sun and soak up every single last ray.

The No. 6 Raiders take on No. 2 Rockville at 12:30 Sunday in the Class M semifinals. Make no mistake about it this is a very big deal. Any game with the possibility of a state championship appearance riding on the outcome carries a memorable magnitude.

Maybe more so in Torrington.  The Raiders are not Ansonia (who is?) or Seymour or Hand or Greenwich or any of the Connecticut heavyweights. It is not a program without its highlights including the legendary 1987 “Ice Bowl” game that saw Torrington rally from an 18-0 deficit for a 19-18 win at the ice cube called Municipal Stadium with the wind-chill factor at 20-below zero.

Then there was Thanksgiving Day 1987 and a49-43 classic over Watertown in which Davie Holliday romped for 275yards and four touchdowns for the Raiders while a kid we would hear more about in another sport named Rico Brogna threw for 374 yards for the Indians.

There are countless other games that register on the `I remember scale’.

The Raiders program is not without glorious days. However, there are no state football title banners on the Connie Donahue Gymnasium wall and NVL titles are not common.

Tuesday (Dec. 1) night’s 37-29 win over Granby/Canton was the program’s first ever state playoff win.  Yeah, we are in memory making territory here.

So, feel good for a program that is in uncharted territory and had to work hard to get there. Feel good for a team that took down rival Watertown on Thanksgiving Day to get to the playoffs and then posted a first round win.  And while you are at it save a huge dose of feel-good for Gaitan Rodriguez.

The road to Rockvillel has been a long one.

At the risk of reminding all of a less than pleasant part of THS football when Rodriguez took the job in 2013, let’s just say he stepped in to it big time. At the same time, he handled it all big-time.

Always a Torrington guy who chewed up big yardage for the Raiders as a quality running back in the mid-1990 (I was there and he was good), Rodriguez jumped at the chance to become head coach when the job opened up in 2013. No coaching job is just about x’s and 0’s but there was a little more to this one than normal.

Two former football players had been arrested for second degree sexual assault and charged with the rape of two 13-year-old girls. While the football program was unfairly targeted in the situation clearly there was a stench emanating from the program and its culture. It was a national story and everybody seemed to want a piece of the football program.

Among the multitude of after effects there was an attempt to rewrite the rules for the school’s athletic policy until the ACLU stepped in. But you get the ugly idea. These were not good days.

Rodriguez, who at the time was a social worker in the Waterbury school system  (he is now at Torrington), jumped on the challenge. He knew it was person first, student attitude and then football. He laid down ground rules. He made playing a privilege, not a right.

He brought in long-time Torrington coach Tony Turina to talk to the team about commitment, high character behavior and respect. Who better than Turina.

The goal – to bring back pride.

He has always believed in the concept of `warrior gentlemen’ a term he credits Litchfield County Sports owner Tim Gaffney with coining and an idea he always subscribes to. Warriors on the field, gentlemen off the field.

It hasn’t come easy, there was a drinking episode during Rodriguez’ first season, adding fuel to the poor perception of the culture of the program with the sexual assault story still fresh. There have been other more normal challenges associated with high school age athletes.

But Rodriguez was keenly prepared by temperament, character and profession to handle issues.

Always the teacher, Rodriguez brought back the pride. Attention has turned back towards the field. There was a state playoff game in 2015.

There has been this loveable season which is still going as Christmas beckons.

Feel good for a program that desperately needed to reassess when Rodriguez arrived. Feel good for the coaches and players who have turned it around and brought back the pride. Feel good for all who have made it happen from A.D. Mike McKenna to the rest of the Raider village.

I hope Torrington wins Sunday. The 8-3 Raiders are on the road and underdogs against 9-2 Rockville, the task won’t be easy.

However, in one sense it doesn’t matter. Torrington doesn’t need a victory to feel good for Gaitan Rodriguez. Feel good for him now and after whatever the outcome.

You knew Rodriguez was the right man at the right time when he was hired in extremely difficult times. Nine seasons later nothing has changed.

You always knew Torrington got it right when they hired him. This has been a great season. Feel good for him and maybe even more so for Torrington who reaps the benefit of his presence. Feel the sun.